Billy was a Soviet spy disguising as an aspiring artist with black hair, black eyes and five o'clock shadow. At the time of his death, he was seen wearing a blue shirt underneath a gray jacket, black pants and black shoes.

Jack and the player found Billy's murdered corpse in the Manhattan Grand Central Station. After sending the body to Janis, the team found out from her that Billy was stabbed in the hip with a small, sharp object and then let bled out in about 30 seconds. Not only that, Janis also discovered traces of canned tomato soup on the victim's clothes, deducing that the killer left them while holding Billy's left shoulder to stab him. It proved that Billy's killer ate tomato soup.

Later, the team found a bloody ice pick inside a trash can, which was later analyzed by Theo. After analyzing the ice pick, Theo confirmed that it was the murder weapon used to kill Billy. Theo also found traces of zinc oxide and hydrocortisone on the handle of the ice pick, which were the ingredients in rash ointments, meaning that the killer had a rash.

As a spy for the Soviet Union, Billy worked for ambassador Lev Romanov. However, he turned on Lev and began to spy on him as well. Billy's cover story was that he was an artist working under Sandy Lemko at the Workshop. Billy had promised to fund Sandy's movie "Rubbish", but had never followed through with his plan. At the Workshop, Billy met artist Ellie Argent, who developed romantic feelings for him. Newsagent Bucky Johnson was humiliated by Billy at one of his parties, and bar owner Martha Jefferson was attacked by Billy after she falsely assumed him to be gay.

The killer turned out to be Ellie.

Ellie admitted to the murder, however, she denied knowing that Billy was a Soviet spy, saying that she was Lemko's favorite artist until Billy rejected her advances. Soon after Billy blew her off, the whole scene began ignoring her as well. Desperate to get back in the spotlight, Ellie used an ice pick to stab Billy in the hip and left him to bleed out. The team then handed her to the courts, where she would possibly get sentenced to 20 years in prison. 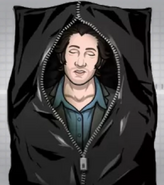 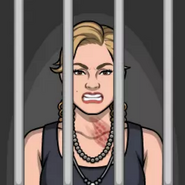 Ellie Argent, Billy's killer.
Add a photo to this gallery

Retrieved from "https://criminalcasegame.fandom.com/wiki/Billy_Snapshot?oldid=533461"
Community content is available under CC-BY-SA unless otherwise noted.