Bill Farnham was a suspect in the murder investigation of Lee Dupree in Bayou Blood (Case #6 of Pacific Bay).

Bill is a 35-year-old voodoo shop owner who sports a dark green beret on top of his brown hair, and can be seen holding a rabbit's foot on his left hand. Bill sports a name tag identifying himself as a worker of the voodoo shop, has brown eyes, sports a beige tank top, has a brown lanyard belt around his body carrying a voodoo head with a pin, and has a pouch tied with a cord hanging off his neck. Bill also wears a necklace with two feathers and sports red suspenders. It is known that Bill is in contact with shrimp.

When Roxie opened a package intended for the player to open, she had to let the player examine the package only to find a voodoo doll identical to the style Lee was murdered. Since the voodoo doll was a replica of the murder at the primary murder scene, Frank deduced that the killer utilized voodoo magic, thinking that a voodoo curse killed the victim. The voodoo doll had a tag which concluded that it was made at Bill's voodoo shop, prompting a chit-chat with him at the voodoo shop. Bill permited the team to take a look around at the voodoo shop but afterwards they needed to question him about a voodoo doll that was purchased at his shop in which he responded that a swamp dweller purchased a handful of voodoo dolls moments before the events of this case which eventually led to the team interrogating Eugene for the first time.

Bill budged in the police station admitting that he killed Lee because he implanted pins on the voodoo doll that was purchased at his store earlier on, but Frank could not make arrests unless evidence proved Bill guilty, so the team asked Bill to bring the discussion at the interrogation room about the circumstance, but not before telling the team someone stole that voodoo doll from his store and shipped it to the player. Frank accused Bill of hiding something but Bill brought up Lee's bullying ways because Bill was a regular at the Gumbo Jumbo restaurant before Lee started working there. Frank was curious if Bill used voodoo to kill Lee but Bill would never want to cause physical harm to anyone since it goes against his beliefs of voodoo magic.

Bill was innocent when Shawna Knox was proven guilty of first-degree murder charges, but had to go through the trouble of using his voodoo powers to heal Frank since a voodoo doll replica of himself with a pin on his head was causing all the trouble following the arrest. 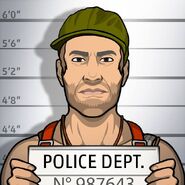 Retrieved from "https://criminalcasegame.fandom.com/wiki/Bill_Farnham?oldid=408060"
Community content is available under CC-BY-SA unless otherwise noted.