Captain Bill Beatty was the killer of resistance member Dylan Mitvok in Resistance Is Fatal (Case #56 of Mysteries of the Past).

Bill is the 41-year-old (now-former) Head of Clandestine Operations for the Justice Corps. He has black hair and a mustache. He dons a brown coat with an ink stain and a Justice Corps badge over an olive green waistcoat and a white shirt with a red tie. Additionally, he wears a pair of glasses. It is known that Bill drinks camomile tea, rides a bicycle and bites his nails.

Bill first came to the Flying Squad after hearing of Dylan's murder, informing them the victim was a spy working for him to find information about the resistance against Mayor Lawson's regime. He explained when he heard of the resistance movement, he felt they needed to be destroyed, so he sent the victim to find out all he could about them. Then he would report back to Bill at Smokey's Café, but unfortunately he did not get much information before Dylan was killed. When he told the team to give him all they knew about the resistance, the player and Isaac managed to avoid giving anyone up, and decided to continue their investigation at Smokey's Café since the victim went their for reports.

Bill was spoken to again about a message he sent to the victim, saying he knew he was hiding information. He explained at first the victim was doing well in giving him information about the resistance. But as time went on, the information dried up, and some of it was even wrong. He said he wanted to meet with Dylan, but he never showed up, so he returned to his office where he heard that he had been murdered.

In the end, it was revealed that Bill was the one behind Dylan's murder. Admitting to the murder, Bill said that the murder was his duty. Already suspecting that Dylan was withholding information from him, he decided to spy on his own and was led to the barn unwittingly by Dylan. When Bill asked Dylan for the information in the barn, he refused, having been convinced that the resistance was on the right side. To force the information from him, Bill knocked Dylan out and crushed him with a printing press, where he bled to his death. Replacing Takakura after his murder, Judge Umbright sentenced Bill to life in prison.

Later on, the player and Maddie spoke with him in an effort to fool him into trusting them, so they could fool Inspector Jaubert later on. And fortunately for them, it worked as Bill believed they were on the same side. 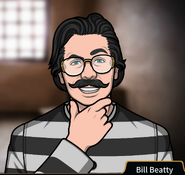 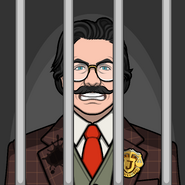 Bill, sentenced to life in prison for the murder of Dylan Mitvok. 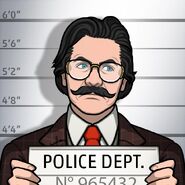 Retrieved from "https://criminalcasegame.fandom.com/wiki/Bill_Beatty?oldid=536675"
Community content is available under CC-BY-SA unless otherwise noted.