The Bigfoot was the victim in One Bigfoot in the Grave (Case #2 of Supernatural Investigations).

The Bigfoot had blue eyes with grey-brown fur and matching eyebrows. He also sported multiple wrinkles on his forehead, below his eyes and above his mouth.

The Bigfoot's body was found with his head bashed in at a camping site in the Oregon forest. Ben confirmed that the Bigfoot fought with his killer before his death. He also told Luke and the player that he had found traces of peanuts, dried fruit, and chocolate on the Bigfoot's fur, which turned out to be the ingredients of trail mix. Assuming that the bigfeet did not eat trail mix, Ben confirmed that the killer ate trail mix.

Later, Luke and the player found a bloody rock inside a crate of bottles at a cave bar. Speculating that it was the murder weapon, they sent the rock to Priya, who confirmed their suspicions. She also found some fibers stuck to the rock. After cleaning the blood from them, Priya discovered that the fibers showed a dye pattern for plaid clothing. Since the bigfeet did not wear clothes, Priya concluded that the killer wore plaid clothing.

The Bigfoot was friends with tea party-obsessed vampire Bathsheba. Out of generosity, he gave her some of his blood to drink due to Chief Arrow's restrictions on human blood-drinking. The Bigfoot enraged lumberjack Elwood Grimes when he destroyed all of his logging equipment. He also scared hiker Marigold Carson as she was taking a selfie by a cliff, nearly causing her to fall over the edge. In retaliation, she blasted him online, believing the Bigfoot to be a man in a furry costume. Museum curator Darius Wexler set a trap for the Bigfoot, desperate to see a bigfoot before he died. Novelist Arthur Darkwood came across the Bigfoot on a hike and saw his gentle nature, forcing him to rework his bigfoot series as the Bigfoot's nature contradicted Arthur's beastly depiction of the species.

The killer turned out to be Elwood.

Elwood admitted that Darius had offered to pay to replace his tools that the Bigfoot had destroyed if he could catch the Bigfoot alive. When Elwood went to the woods to set up the trap, the Bigfoot started attacking him. Elwood then grabbed a rock and bashed him to death. Chief Arrow then advised Elwood to get out of town before the rest of the bigfeet started coming for him in revenge. 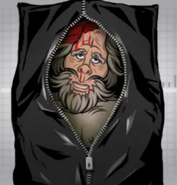 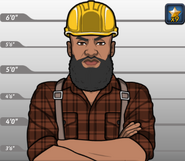 Elwood Grimes, the Bigfoot's killer.
Add a photo to this gallery

Retrieved from "https://criminalcasegame.fandom.com/wiki/Bigfoot?oldid=530732"
Community content is available under CC-BY-SA unless otherwise noted.