In his first appearance, he wears a blue beanie hat on top of his head, and a blue and white bandana covering it. He also wears a blue Vipers T-shirt and is seen to have dandruff on his shoulders. Furthermore, he has thin facial hair and a stud earring on his right ear. It is known that Big Baby wears sport shoes and smokes.

In his second appearance, he has grown more traces of facial hair and has his hair tied in a bun. He also appears to have tanned. He wears a dark blue vest under a sky blue collared shirt adorned with a multicolored bow tie. It is discovered that he suffers from insomnia.

Big Baby became a suspect after Jones and the player found a love letter he wrote to Rose Cassidy, the victim's girlfriend. He was then seen looking around the crime scene trying to prove that a member of The Skulls had killed Chad.

Big Baby was found to be innocent after Joe Stern was arrested for the murder.

Big Baby became a suspect again after Jones and the player found his likeness in a figurine for the game "Double Vipers." The team then talked to him about the game, who explained that he and Ash had quit the gang life to become video game stars. He said that he had programmed a game about the gangs, "Double Vipers", which became a hit. He and Ash would split the profits from the game. When the cops informed him that Ash was dead, he said that he had nothing to do with it, reiterating that the gang life was over and that he was Ash's boss.

Later, Jones and the player found Ash arguing with Big Baby to raise the price of the arcade game to $2. Big Baby insisted that $2 would be too expensive and that the kids would stop playing, but Ash said that raising the price was an order. Big Baby, meanwhile, said that he did not take orders from him anymore as they were not in the gang anymore. When they talked to Big Baby, he said that Ash wanted to take control of everything in the game as he was still relishing in his position as leader of the Vipers. However, Big Baby believed he had more control over the game as its inventor, not even accounting the fact that the Vipers were over.

Big Baby was proven innocent again when Ash's girlfriend, Joy Schneider, was found guilty of the murder. After the trial, Alex and the player approached him about the possibility of releasing a mobile app version of the game so he could gain more profit. Skeptical at first, Big Baby consented upon hearing the possibility of more profit, as long as the game was not virtual reality (because DreamLife had laughed at him for being a hoodlum coder). Alex and the player found Big Baby's code, and Alex informed Big Baby that they could collaborate on making the code for the game be fit for the specifications of the phone. 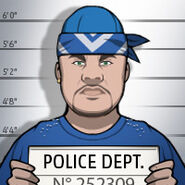 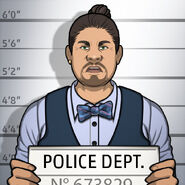 Retrieved from "https://criminalcasegame.fandom.com/wiki/Big_Baby?oldid=530556"
Community content is available under CC-BY-SA unless otherwise noted.