Biff Wellington was a suspect in the murder investigations of stripper Trixie Velvet in Beautiful No More (Case #8 of Grimsborough) and shop owner Lucy Campbell in Fashion Victim (Case #14 of Grimsborough). He also made a minor appearance in Into the Vipers' Nest (Case #11 of Grimsborough).

Biff is a 36-year-old African American security guard with black eyes and a bald head.

In his first suspect appearance, Biff wears sunglasses on top of his bald head. He has a little beard and moustache, and wears a gold chain around his neck on top of his yellow t-shirt with a white star on it. On this star, there is a red fist punching through it.

In his second suspect appearance, he ditches the sunglasses and the chain and wears a black shirt reading "SECURITY". He also sports a red sweat band that reads "SECURITY" as well. It is discovered that he drinks Diet Cola and listens to classical music.

Biff was the bouncer of the Blue Flamingo Night Club where he worked for Tony Marconi. Biff was called in to see if he had seen anything suspicious regarding Trixie Velvet's death. He replied that he had not. Biff was not seen again until he needed Jones and the player's help in finding a lighter that Salvador Cordero had dropped the last time he was in Blue Flamingo. He needed the team to find it because if Marconi discovered that Biff had let in Cordero, there would be hell to pay as the two did not like each other. This was proven true when Cordero was later murdered by Marconi.

After Marconi was arrested for the murder, a prostitute named Ginger took over the club. A man named Curtis Newman refused to let Ginger take over the club and hid the legal document. Until the team found it, Curtis was held in custody by Biff.

It was discovered that Biff had left the Blue Flamingo Night Club and had started working at a mall as a security guard. He was spoken to about the death of Lucy Campbell, as he was working at the same mall where the victim worked in. He told the team that Lucy was dating her girlfriend, Kim Aoki. Later, he informed the team that there was a security camera which could give them more information about Lucy's killer. 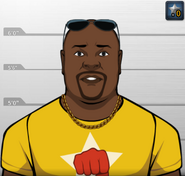 Biff, as he appeared in Beautiful No More (Case #8 of Grimsborough). 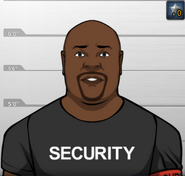 Biff, as he appeared in Fashion Victim (Case #14 of Grimsborough). 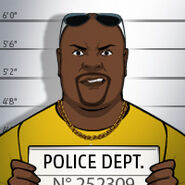 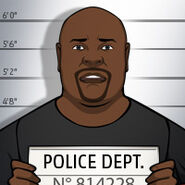 Retrieved from "https://criminalcasegame.fandom.com/wiki/Biff_Wellington?oldid=531310"
Community content is available under CC-BY-SA unless otherwise noted.