Betty Wyatt was a suspect in the murder investigation of croupier Alfie McNaulty in Killer Takes All (Case #51 of Pacific Bay).

Betty is a 39-year-old tourist who is visiting Paradise City. She has light brown hair tied into pigtails underneath a light blue visor with the words 'Pacific Bay'. She wears a purple and white striped sleeveless shirt and, a sapphire ring on her left hand, and is seen holding two travel guide books. It is known that Betty eats shrimp cocktails and is superstitious.

Frank and the player first spoke with Betty after they found her teddy bear next to the victim's body. She recognized the victim as Alfie McNaulty, a croupier for the Mennagio casino poker tournament. The team thanked Betty for her assistance and proceeded to investigate the casino Alfie worked at.

Betty was interrogated again after they found her phone with a threat to the victim. She lost $10,000 at the victim's table, despite being sure she would win. The victim then told her to leave saying she was gambling too much money away, making her mad. She also went on to say that if Alfie let her stay, she would have won her money back.

Betty was found to be innocent after the team incarcerated Grace O'Brien for Alfie's murder. However, after the investigation, she requested the player's help. The player, accompanied by Roxie, were told that Betty was thought to be cheating, though Betty claimed she won fair and square. They found a camera in the casino and sent it to Russell to analyze Betty's behavior, to see if she was cheating. According to Russell, she played fair and square and did not commit any acts of cheating. She thanked the player for helping her get her money, so she could continue her gambling spree. 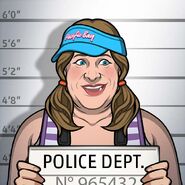 Retrieved from "https://criminalcasegame.fandom.com/wiki/Betty_Wyatt?oldid=518634"
Community content is available under CC-BY-SA unless otherwise noted.