Betty Hugo was a suspect in the murder investigation of her husband, Captain Harry Hugo, in The Hunger Planes (Case #28 of Pacific Bay).

Betty is a plane crash survivor at 40 years of age, and she is the wife of the late Captain Hugo. She has brown hair and green eyes. During the events of the case, she has frostbite on her fingers and her nose, and she also has a bloody gash on her right cheek. She is seen wearing a blue blouse underneath a green and red sweater. Betty also wears earrings and a brown scarf. It is known that Betty uses herbal toothpaste and can sew.

Betty found herself in trouble after Amy and the player found a coded note inside an Osprey Airlines locker addressed to Captain Hugo. Due to the coded nature of the note, Amy had to ship the note to Hannah for digital observation. Hannah couldn't help but notice that the coded note mentioned an anniversary, with which the player could deduce Betty being Captain Hugo's wife.

Betty told the authorities that she loved and adored Hugo and that she acted as a stowaway to notate her wedding anniversary, which was cut short due to the plane crash. Hugo was generous enough to share rations with Betty, who now wanted to avenge her husband's death by cannibalizing his killer.

Betty would be in a second discussion with the team after Amy and the player found an Osprey Airlines flight recording during Alice Blick's rescue which only Hannah could observe digitally. Hannah was generous enough to showcase the recording, in which Betty distracted Captain Hugo during his conversation with the aviation traffic control--causing him to make it clear he wanted to leave Betty. The distraction caused the plane crash thanks to Hugo and Betty arguing, which prompted Amy and the player to approach Betty in the interrogation room.

Amy told Betty that the plane crashed due to her and Hugo arguing, to which Betty responded that she had tried so hard to make the marriage work. Betty caught Hugo cheating on her which suggested that he intended to divorce her, but Betty wouldn't let Hugo do so. Betty's love for Hugo had nothing to do with the shocking revelation of the case. 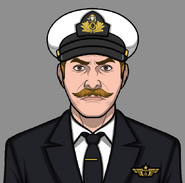 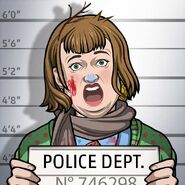 Retrieved from "https://criminalcasegame.fandom.com/wiki/Betty_Hugo?oldid=413835"
Community content is available under CC-BY-SA unless otherwise noted.