Betty-Lou Logan was a suspect in the murder investigations of street swindler Sammy Duncan in Death by Moonshine (Case #9 of Pacific Bay) and local girl Vanessa Kimmel in Smoke and Mirrors (Case #10 of Pacific Bay).

Betty-Lou is the 50-year-old owner of The Mad Cow, a Southern-themed bar in Bayou Bleu. She sports uncombed dark blonde hair and green eyes, and has wrinkles on her face. She wears a red plaid jacket over a gray shirt and has a white bar towel draped over her right shoulder.

In her first appearance, it is known that Betty-Lou uses eggs, drinks moonshine and plays dominoes.

In her second appearance, it is discovered that she knows fishing.

Betty-Lou was called in by the police team after Frank and the player found a human head in the bar, after which she told the team she recognized the head as belonging to Sammy Duncan (whom she addressed as being "Sammy the Swindler"), a regular. She wanted to re-open the bar after Frank and the player interrogated the premise for clues, but Frank wanted an explanation as to why there was a blackboard smashed to pieces. Betty-Lou claimed that Sammy always had the cash to pay his bills in a weird way and was an avid talker, something Betty-Lou did not like in a business world, so she banned Sammy from the bar in suspicion that the police would cause unrest to her reputation.

Betty-Lou would be due for a second interrogation inside her bar right after the team found a moonshine ad promoted by Betty-Lou for her new line of moonshine in response to Sammy's moonshine. Betty-Lou was right about her making her own moonshine exclusively for her bar, but in spite of her moonshine's exclusivity, Sammy's moonshine was of high quality and drove people away from Betty's bar--a reason as to why Betty-Lou made her own moonshine to remind Sammy she would not tolerate competition. During the conversation, Betty-Lou even mentioned Vanessa Kimmel working for her albeit she did not show up for the majority of the time, but explicitly stated that competition did not warrant a murder.

Betty-Lou was found innocent at the close of the case, but the fact that she outed Vanessa as someone affiliated with her bar drove Amy to a state of concern in the hours following the close of the case. Betty-Lou admitted that Vanessa was her employee, but quit after realizing she was not paid enough for her time working for the bar. Betty-Lou could not help but say she did not have time to help Amy and the player out, so the team looked around the bar and found a torn photo pieced back together for Hannah's inspection.

After thorough inspection, Hannah concluded Vanessa had once been a prostitute, and feeling alarmed, Amy hurried back to talk to Betty-Lou about the turn of events. Betty-Lou hated Vanessa's quest for more money (in spite of her giving Vanessa a decent job) but Vanessa retaliated by ripping the photo to shreds, and Betty-Lou felt that talking about Vanessa would be a lost cause to her and suspects the police would run into Vanessa one day, although the police were not happy with the grim outlook Vanessa had.

Betty-Lou found herself in the red a second time when the team found a trophy at the hut with what she wrote to Vanessa was found as a threat as discovered by the team. Betty-Lou countered that it was the mannerism of her speech, as she wanted Vanessa to leave Bayou Bleu before something bad happened to her.

Betty-Lou was approached by the police once again when Amy and the player found a tip jar inside a burned brothel, in which Betty-Lou countered that Vanessa stole Betty-Lou's tip jar grounds for Amy assuming a tip jar would be a strong motive for murder, but in spite of Amy's grilling, Betty-Lou made it clear that theft does not warrant bloodshed, even going far to say the tip jar could have been used to bail out of the Bayou.

Betty-Lou was found innocent at the climax of the case, and did not need additional attention following the incarceration of the killer. 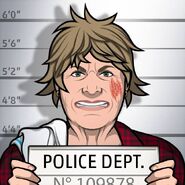 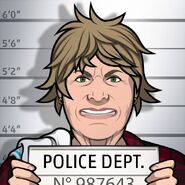 Retrieved from "https://criminalcasegame.fandom.com/wiki/Betty-Lou_Logan?oldid=413857"
Community content is available under CC-BY-SA unless otherwise noted.