Bert is a 21-year-old bartender. He has short curly black hair and a mustache. He wears a red coat over a white collared shirt with a bowtie. He is seen holding a shaker. It is known that Bert has access to acid.

Bert became a suspect after Maddie and the player found his employee badge at the scene of the crime. He told them that the victim was Joseph Pryor, a journalist for the Concordian Gazette. As to why his badge was at the crime scene, he explained that he lost his badges all the time. He then excused himself to get back to serving the customers.

Bert was spoken to again about a box of chocolates he had given to the victim. He explained that the victim had been romancing him for months, but when he gave him the chocolates, he threw them back in his face. He realized that the victim's affections were never real, and that he was just using him to get the gossip at the bar. He revealed that he had contemplated suicide after the revelation, but said that he wasn't going to die just to please Joseph.

Bert was found to be innocent after the team incarcerated Hector Harvey for Joseph's murder. 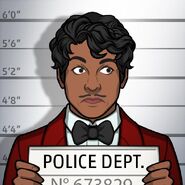