Benjamin is a 17-year-old teenager from Britain who is on a gap year in the Sahara. He has messy brown hair and sustains a sunburn due to exposure to the sun. He wears a dirty gray sleeveless shirt and a bone necklace.

In his first appearance, it is known that Benjamin drinks goat's milk.

In his second appearance, it is discovered that he uses Buzzer.

In his third appearance, he wears a green camo jacket, has grown a 5 o'clock shadow, and has a scar on his face. It is revealed that he knows chemistry.

Benjamin became a suspect after the player and Carmen found his tablet in an area between the Najwa camp and the refinery. He explained he was at the Sahara because he was on a gap year. When explained about Donald Barnes' death, he said he simply there to have an adventure as far away from American businessmen as possible. Carmen and the player returned his tablet to him then left him and said to call them if he sees anything unusual.

Benjamin was spoken to again regarding a SandOil lighter, SandOil being the company the victim ran, found in his backpack. He confessed he never spoke to Donald, but he did steal the lighter from him at the airport. While waiting at immigration, he caught the victim trying to jump the queue, so he stole his lighter. He said he was not proud of it, but he did it on the spur of the moment. He said he tried to give the lighter back to Donald's bodyguard Jonah Karam, but was too embarrassed to fess up.

Benjamin was found to be innocent after the team incarcerated Mama Yasmine for Donald's murder. However, Carmen and the player needed to speak with him again about a selfie he took saying he was at Mr Sparkle's theme park, when in all actuality he was in the Sahara. He said the selfie was to fool his parents so he could travel alone to the desert. Carmen was not sure if what he was doing was right, but Benjamin begged them to keep his secret or else his father will repatriate him. He also points out he has not done anything illegal, and told them to see the nomads instead, so the player and Carmen left him to his business.

Benjamin got himself involved in another murder investigation after the player and Carmen found traces of his DNA on a protest sign in the protest square. He explained he was at the square to be a part of the protest going on, though was disappointed to hear of the leader's death. He respected Hamza for his attempts to overthrow Sultan Mahmoud, who gains his money trading with the West and spends on trivial goods.

Benjamin had to be interrogated again regarding a picture of him holding a rifle saying "I AM tough enough". Benjamin said again he wanted to take part in the protest, but the victim said he was not tough enough to kill for the cause. He was originally going to post the picture on Buzzer, but decided to give it to him personally out of risk of him not seeing it. When Carmen suggested he decided to take it a step further and kill Hamza himself, Benjamin said the point was to get the victim to accept him, plus the gun was just made of plastic anyway.

Benjamin was found innocent again after the team incarcerated Thomas Cox for Hamza's murder. However, he was spoken to again regarding him tablet being found in the Sultan's palace. Elliot had a look at Benjamin's emails, and he thought the latter had a good family life back in London. Wondering why Benjamin would run away from such a lifestyle, Elliot came along with the player to try and talk some sense into Benjamin. He said his tablet was in the Sultan's palace was because he was trying to attack him, but chickened out and ran away. Elliot pointed out that the Sultan killed people for less charges, but Benjamin said he did not care, that the people were suffering, and that he could relate to it. Though Elliot said what Benjamin's parents do to him are nothing compared to what the people here experience, Benjamin did not care and thanked the player for returning his tablet.

Benjamin became a suspect again after the player and Carmen found traces of English tea found on a map in the bunker where Andrew Stern was hidden. He said he discovered a secret bunker whilst in Iraq, so he decided to check it out and write about it in his blog. Carmen pointed out how a child was found kidnapped in that bunker and he could be next, but Benjamin told them to go catch some real criminals and to leave him alone.

Benjamin had to be interrogated again about a video recording pledging his allegiance to The Sword. Carmen could not believe that Benjamin was acting like an extremist, but felt she and the player had to treat him as an adult and a suspect. Carmen pointed out to him the countless crimes The Sword committed, but Benjamin said that change always comes at price and nothing more.

Benjamin was found to be innocent after Omar Bahir was unmasked as The Sword, but he had to be spoken to again by the player and Elliot about a text he made saying he has nowhere to go anymore. Benjamin said when asked if he should go home that he is not cut to be terrorist, or even anything. Elliot said he at least had parents who loved him, even if they are a bit clingy. When Benjamin pointed out what they could say when they hear about what he did, Elliot simply said we all make mistakes and he could tell them all the cool bits he did. Benjamin thought it was a good idea, and thanked the player and wished them good luck. 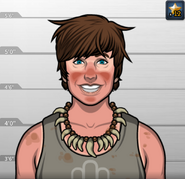 Benjamin, as he appeared in Death in the Desert (Case #8 of World Edition). 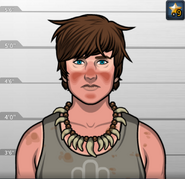 Benjamin, as he appeared in Killing Spring (Case #9 of World Edition). 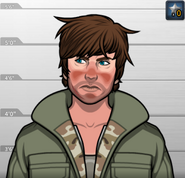 Benjamin, as he appeared in Die by the Sword (Case #12 of World Edition). 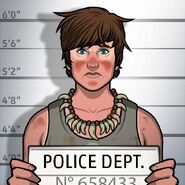 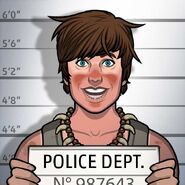 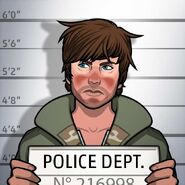 Retrieved from "https://criminalcasegame.fandom.com/wiki/Benjamin_Scott?oldid=489120"
Community content is available under CC-BY-SA unless otherwise noted.