Stab wound through the torso

Benjamin Galls was the victim in Little Murder on the Prairie (Case #27 of Mysteries of the Past).

Benjamin was a farmer with curly brown hair and black eyes. He donned an open-collar, buttoned-up peach and pink striped shirt with brown suspenders. During the investigation of his murder, it was discovered that his blood type was O+.

Benjamin was found face down in a water trough, stabbed in the back. Per Dick, Benjamin was stabbed to death with a four-pointed object, like a pitchfork, but not before putting up a fight in which his killer spat on him. Since he found traces of wheat in the saliva, he concluded that the killer chewed wheat.

The team later found a pitchfork on his farm which was instantly filed as the murder weapon. It had (per Viola) the killer's blood on the handle, type A-, meaning the killer had A negative blood type.

Benjamin's daughter, Adaline Galls, quarreled with him as she blamed him for driving her mother away with his constant work. Cowboy Clay Westwood did weeks of work for Benjamin, but was not paid for his work. Italian gangster Vinnie Costa was caught with Benjamin's possessions, although he claimed that he gave him the mirror out of generosity. Italian mob daughter Giulietta Capecchi used to visit the Galls farm with her late sister when they were younger. However, when she returned to the farm to scatter Lucrezia's ashes, she was chased off the farm by Benjamin for being associated with the Italians. Store owner Ethel Spencer paid him to fix a hole in her storeroom roof, but the roof caved in due to his shoddy work.

The killer turned out to be Vinnie.

Vinnie initially denied the accusations but then admitted to the crime. The Italian gang had sent him to forcefully evict Benjamin from his farm after he refused. Benjamin put up a fight and Vinnie threatened him with a pitchfork, but accidentally impaled Benjamin when he charged towards him. Judge Lawson sentenced him to 10 years in jail. 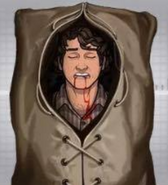 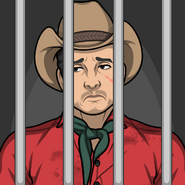 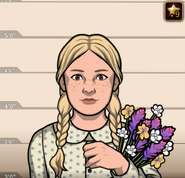 Adaline Galls, Benjamin's daughter.
Add a photo to this gallery

Retrieved from "https://criminalcasegame.fandom.com/wiki/Benjamin_Galls?oldid=470868"
Community content is available under CC-BY-SA unless otherwise noted.