Belinda was a 36-year-old witch with blue eyes and short blonde hair adorned with a red and orange poppy-chain tiara. She donned an orange dress adorned with red poppies and glittery red lining as well as a matching choker. She also sported red lipstick, red eye glitters and held a white magic wand with a glittery red flower. It is known that Belinda used elixirs and knew Over the Rainbow.

At the time of her death, she ditched her magic wand.

In her quasi-suspect appearance, Belinda's body glows blue due to being a ghost.

Belinda became a suspect after Luke and the player learned that she was the employee of the month at Aquamarine City. She told the team that she was an actual witch that had taken the job as an entertainer in order to pay the bills, proving herself by transforming a piece of wood into a bird. Luke then mentioned the missing children that had been kidnapped by witches, prompting Belinda to tell the team not to pay heed to such gossip.

Belinda was spoken to again about her getting angry with the victim after amusement park owner Frankie Sparkles told the team that she was livid with him due to his complacency in his work. She revealed that the victim was sabotaging her performances, suggesting that he had done so out of jealousy or boredom. She then revealed that his heckling had made her accidentally turn an onlooker into a toad, which she told the team that she would never forgive him for.

Belinda was found to be innocent after the team incarcerated Frankie Sparkles for Norm's murder. Later, Felix and the player asked Belinda about the missing children. Despite believing that the team were mistaken, she told them that she would do her best in order to find the children if they were really missing. She instructed the team to fetch her crystal ball for her from the palace ride, prompting Felix and the player to return to the palace ride.

After repairing the crystal ball and confirming that it had no hexes on it, Felix and the player returned it to Belinda. Scrying, Belinda conjured an image of children mentioning how a witch was going to eat them on Walpurgis Night. Belinda revealed that Walpurgis Night was the witches' most holy sabbath and that it was going to happen in two days. She allowed the team to take her crystal ball and promised that she would contact them through it when she discovered the location of the Walpurgis celebration.

After discovering the demon identity of Bucky Johnson's killer, Seth Daemon informed Gwen and the player that he had seen Belinda's ghost by the lighthouse. When they arrived, Belinda showed herself to the team and told them that it was wonderful to speak with them again, admitting that she had been watching over the team since her death as she knew about their fight against the impending demon invasion. She revealed that one of the demons had left an important message on a stone tablet for his compatriots by the lighthouse and urged the team to find the tablet and protect themselves.

On Walpurgis Night, the team received a message from Belinda through her crystal ball, telling them to head to an abandoned castle in Indiana. There, however, Chief Arrow and the player found her drowned beside a cauldron. Ben confirmed that she had drowned, confirming the cauldron as the murder weapon, after sustaining blunt force trauma to the head. He also found traces of chamomile around her head wound. After Priya confirmed that the cauldron contained no traces of chamomile, Ben concluded that the killer used chamomile.

Later, Chief Arrow and the player found a broken angel statue and sent it to Priya, who confirmed it was used to knock Belinda out after finding her blood and hair on it. Morever, Priya found another sample of blood on the statue, allowing Priya to conclude that the killer had blood type O-.

Belinda distanced herself from her sister, witch coven leader Morgana Blackhawk, whom she was critical of. She was disliked by fellow witch Agnes Leek as Belinda had once replaced her collection of snake venom with Rocket Cow out of concern for her safety. She was also disliked by Wiccan witch Heather Night as her vote against her joining the convent crushed the latter's chances of becoming a witch. Belinda had caught young witch Avery Mitchell attempting to join Walpurgis Night and kicked her out for her own safety, to the young witch's dismay. She had also attempted to protect the children from Pandora Geiss, which the latter denied.

The killer turned out to be Heather.

Heather admitted that she had come to Indiana to get accepted into the witch's coven, but as a senior member, Belinda vetoed her acceptance. However, Morgana promised that she would override the vote if Heather killed Belinda. The team then figured that Morgana had ordered Belinda, her younger sister, dead after the latter confronted the former about the missing children. The team then turned Heather over to the authorities. 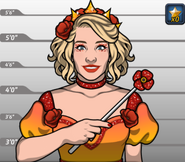 Belinda, as she appeared in A Murder of Crows (Case #19 of Supernatural Investigations). 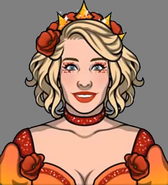 Belinda, as she appeared in Scry for Help (Case #20 of Supernatural Investigations). 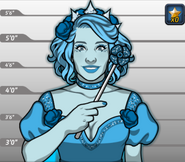 Belinda, as she appeared in To the Lighthouse (Case #27 of Supernatural Investigations). 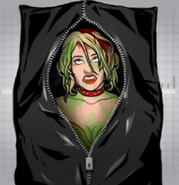 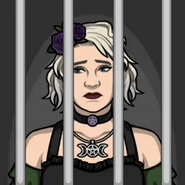 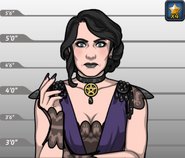 Morgana Blackhawk, Belinda's sister and the mastermind behind her murder.
Add a photo to this gallery

Retrieved from "https://criminalcasegame.fandom.com/wiki/Belinda?oldid=529614"
Community content is available under CC-BY-SA unless otherwise noted.