Behind the Mask is a case featured in Criminal Case as the twelfth case of Mysteries of the Past (Season 4) and the one-hundred eighty-third case overall. It is the final case to take place in the Elysium Fields district of Concordia.

Isaac and the player went to Alastor's party in the mansion in order to uncover his identity once and for all. Upon entering, Isaac got soaked when a guest fell into the pool. Angry, he went there with the player, only to find George Buchanan stabbed dead.

Mid-investigation, Maddie went to the party to go undercover but discovered the absinthe in the billiards room and got drunk. Later, journalist Katherine Woolf snuck into Evie's library. The team then found enough evidence to arrest Wentworth, Archie Rochester's valet, for the murder.

After admitting to the murder, Wentworth drank a bottle of poison to take Mr Alastor's secret to the grave. He later succumbed to the poison's effects before the team could find out more. The team then deduced that Wentworth would die only for Archie, his master.

District Attorney Justin Lawson and the player talked to Archie, who refused to admit to the accusations. They then searched the billiards room and found a piece of paper, which was a script of Alastor's admission of love to Giulietta Capecchi at the end of the party. Upon interrogation, Giulietta said she had thrown away Alastor's gift to her in the fountain, which Justin and the player found. According to Evie, the tiara box was purchased by Archie.

The two talked to Archie, who then admitted to being Alastor. He said that he had created the persona even before he met Giulietta in order to gain popularity. He then admitted that the recent murders were something special to woo Giulietta. Furthermore, he said that Wentworth had stabbed George with a champagne saber because he thought that his master would kill George himself for courting Giulietta. The two then placed him under arrest.

Meanwhile, Charlie went to Maddie to ask for an equipment she took while intoxicated in the airship. Upon getting the equipment back, Charlie finished his and Dick's Detection of Necessary Attributes (DNA) machine, which would help identify people based on biological traits. Afterwards, Charlie and Dick successfully tested the machine with Katherine's hair.

After the events, Chief Wright admitted that because he was not directly responsible for any crime, Archie had to be freed. He also said that Archie was being sent abroad by his parents, which greatly angered Justin. The next day, Charlie informed the team that they were able to submit the DNA machine in time and that they were to participate in the World Exhibition.

Richard Wells
Add a photo to this gallery 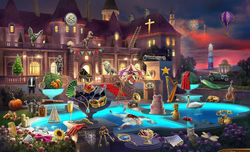 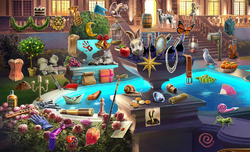 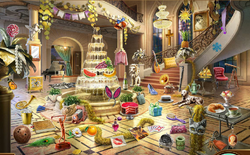 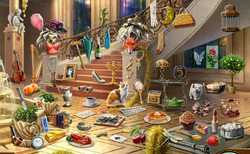 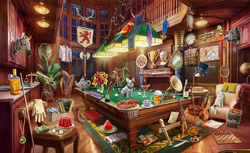 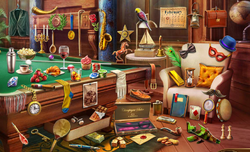 Cosy Corner
Add a photo to this gallery

Retrieved from "https://criminalcasegame.fandom.com/wiki/Behind_the_Mask?oldid=527658"
Community content is available under CC-BY-SA unless otherwise noted.