Criminal Case (mentioned)
Beatrice the Second, appearing as a minor character in Criminal Case, was mentioned during the events of The Haunting of Elm Manor (Case #28 of Grimsborough).

A fine woman, Beatrice had black hair braided at the back and often wore a long Roman-like dress. She was Camilla Brown's great-grandmother.

Beatrice was mentioned during the case by her great-granddaughter Camilla. During the conversation between her and the police, she told them that Beatrice used to own Elm Manor. Beatrice's manor was passed down from generations to generations until Camilla's brother lost the family fortune and they were forced to sell the manor. Camilla could not let foreigners take over the house so she became their housekeeper and gardener to keep an eye on them. 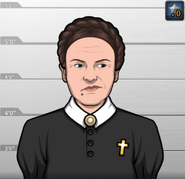 Beatrice, as she appeared on the photograph found by Ramirez.
Add a photo to this gallery

Retrieved from "https://criminalcasegame.fandom.com/wiki/Beatrice_the_Second?oldid=419880"
Community content is available under CC-BY-SA unless otherwise noted.