Dr. Beata Seahorn was a suspect during the murder investigation of professor Ernest Picklebrain in Monkey Business (Case #16 of Mysteries of the Past).

Beata is a 37-year-old marine biologist. She has blonde hair tied into a bun, freckles and black glasses. She dons a faded gray lab coat over a white buttoned blouse with blue stripes with a vial and a green distilling tube in the front right pocket. It is known that Beata knows biology, eats bananas and visits the Public Aquarium.

Beata became a suspect when it was found that Ernest shared his laboratory with her. Beata was more concerned for her Chironex fleckeri upon finding that Ernest died while swallowing it. She demanded to know who stole her jellyfish, which she bred in the laboratory, being the only person in Concordia to know how to breed them outside of their natural habitat. However, she would never waste her jellyfish on Ernest or anyone else because of how rare they are.

Beata was spoken to again regarding her plankton which was found on Ernest's kit. She said that Ernest stole her instrument kit and even had the nerve engraved his name on it. He would appropriate her things all the time, from her bananas to precious lab equipment. She was also furious about how intolerable he was as a lab partner, having no respect for life, specifically for her jellyfish, to the point where he tried abducting one to experiment on it.

Beata was found innocent after the team incarcerated Somerset Osborne for Ernest's murder. 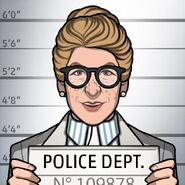 Retrieved from "https://criminalcasegame.fandom.com/wiki/Beata_Seahorn?oldid=415359"
Community content is available under CC-BY-SA unless otherwise noted.