Baxter Fraser, also known as "The Viper", was a suspect in the murder investigations of four people in the World Edition.

Baxter is a 21-year-old boxer. He has black hair, a diamond earring on his left ear, and has yellow eyes due to genetic enhancement.

In his first appearance, he dons a taupe brown tank top and ropes around his arms. It is known that Baxter is physically fit and takes vitamins.

In his second appearance, he ditches the ropes and dons a gray shirt, a blue cap, and sunglasses. It is discovered that he eats pavlova and does spelunking.

In his third appearance, he wears his brown tank top once again, and is bruised on his forehead, cheek, and left shoulder. It is revealed that he knows Krav Maga.

In his fourth appearance, he wears a black suit with a lapel pin, a matching tie and white shirt, and an earpiece on his right ear. It is noted that he has military training, takes sleeping pills and drinks whiskey.

Baxter became a suspect after Jack and the player found the victim's tablet, which showed a video of Baxter and the victim talking to each other about winning the championship. When informed of Thanid's death, he felt the victim was too scared to fight so he went and died on him. He said the two of them had been waiting to fight each other for a long time, and was disappointed that was never going to happen.

Baxter was interrogated again about an X-Ray of his broken arm. He said he tried to keep it quiet, and only his doctor and the victim knew about it. When he first got hurt, he approached Thanid to postpone the fight, but the victim replied no. Jack pointed out that Baxter could have been angry at the victim for not postponing the match, but Baxter said he would have been able to win regardless of his injury.

Baxter was later found to be innocent after the team incarcerated Chon Sansurin for Thanid's murder.

Baxter was spoken to again after Ingrid told the team that he was making a mess at the crime scene. He explained he needed to find the photos the victim took of him. The victim caught him while he was spelunking and wanted to put Baxter in his movie, but he did not leave Baxter alone. When Carmen suggested he killed Jackson to protect his cover, Baxter said he would never do such a thing and just wanted to make sure SOMBRA would never find him.

Baxter was found innocent again after the team incarcerated Jermaine Waaka for Jackson's murder. But he came to the team requesting their help with SOMBRA, believing they were helping with the victim's film. To calm him down, Elliot decided to take him to geyser to work out his frustration. There they found a transmitter, and he traced it back to the rugby bar Baxter was hiding out in. He believed SOMBRA was biding their time, waiting for the right moment to take him. Elliot and the player then went to the rugby bar to find the monitoring device. Hoping to cheer Baxter up, they brought the bug to him so he could destroy it. However, he believed that SOMBRA would know he was there, and decided to run away and told the team not to follow him.

Baxter became a suspect again after Jack and the player found his fingerprints on a bunch of bullets with a note telling him to return to his duty. He said to the player not to let appearances fool them and that there was not a lot they understood. He explained that returned to take destiny back into his own hands. When Jack asked if that involved killing Marshall, Baxter simply said they would have to discover the truth the hard way.

Baxter was spoken to again about his journal which said he knew what he had to do. In order to get all the details out of him, Marina accompanied the player for this interrogation. Baxter was furious at how the experiments were carried out without their consent, pointing out how Riaja Somalinggi and Veronica Salter used to be nice people before SOMBRA made them assassins. He also explained he came to the island to put an end to the experiments once and for all, by killing Marshall. However, he noticed that somebody killed him first when he found his body.

Baxter was found to be innocent after the team incarcerated Brice LeBeau for Marshall's murder. But he was spoken to again about the SOMBRA recruits' destination to Kenya in Africa. He admitted he was given the mission to go to Kenya, but that was only a cover so he could kill Marshall. However, he had no idea why they were going to Kenya, but they would be briefed once they got there.

Baxter became a suspect again after the player and Carmen found his fingerprints on the President's tie clasp. He said it was not what they thought, and he was just his bodyguard. When asked how he could have gotten the job, he said he saved the President's life due to his genetically enhanced strength. Due to his favorite agent dying recently, he decided to hire Baxter, who was hoping to do good with his powers. Though Carmen remained unconvinced, and due to the evidence they decided to put him into custody for the time being.

Baxter was spoken to again after his hair was found at the crime scene where Natasha was killed and the President was kidnapped. Baxter was surprised himself, but had trouble remembering what happened. He started panicking, telling them he could not say anything about it, despite Jack asking him. Jack was disappointed since they finally had a lead, but could not get anything out of him.

After discovering that Sarah Bennett was responsible for Natasha's murder and the President's kidnapping, Jack and the player were driven off. Baxter came forth and admitted he aided in the kidnapping because they used his SOMBRA programming to make him. He confessed they were located in the New York catacombs, so Jack and the player went there with Dupont to find them before it was too late.

Once they rescued the President and shot down Sarah, they needed to speak with Baxter in hopes of finding the rest of the SOMBRA agents. However, Marina came in saying he was not in his cell, but luckily Elliot said he was at Time's Square. Marina and the player went there and found him, and Baxter was not surprised they did. He was mostly panicking because someone might use his programming again in and had trouble trusting himself. Marina said he could help him since she had worked with some brainwashed recruits before, so Baxter agreed. After some time passed, she managed to undo the brainwashing, and Baxter could not have been more relieved. Though he could not undo the damage he helped SOMBRA wreak, he hoped he could do good from now on. When asked about the rest of the SOMBRA agents, he said he only knew about the ones in Oceania, and only the higher ups would know where they were. 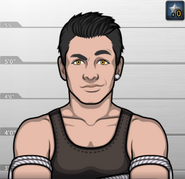 Baxter, as he appeared in Death Match (Case #31 of World Edition). 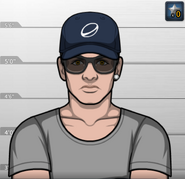 Baxter, as he appeared in Speak, Friend, and Die (Case #34 of World Edition). 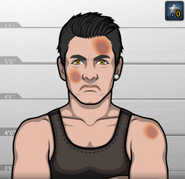 Baxter, as he appeared in Out of the Blue (Case #36 of World Edition). 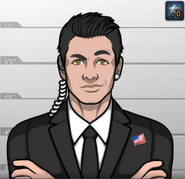 Baxter, as he appeared in The Darkest Hour (Case #56 of World Edition). 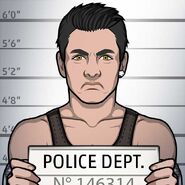 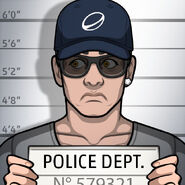 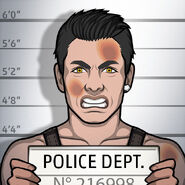 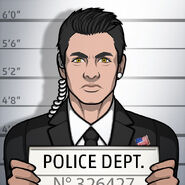 Retrieved from "https://criminalcasegame.fandom.com/wiki/Baxter_Fraser?oldid=479844"
Community content is available under CC-BY-SA unless otherwise noted.