Bathsheba was a suspect in the murder investigations of five people in Supernatural Investigations.

Bathsheba is a 376-year-old vampire. She has blue eyes and disheveled platinum blonde hair adorned with a large red plaid hair ribbon. She is seen wearing a matching jacket over a white patterned blouse.

In her first appearance, it is known that Bathsheba eats trail mix.

In her third appearance, she ditches her hair ribbon. It is discovered that she eats cajeta.

In her fourth appearance, she wears a blue shirt under an olive green jacket with a high white collar, gray clips and a yellow angry emoji badge on her left lapel. She sports a necklace made of fake garlic bulbs and is seen holding a wooden stake in her right hand. It is noted that she drinks Niagara Falls cocktail.

In her fifth appearance, she reverts back to her third appearance and is covered with Spanish moss. It is learned that she writes songs.

Bathsheba became a suspect after Luke and the player found the flower crown that she had made for Bigfoot. When told about the murder, she acted shocked and told the team that he was her best friend. She threatened to suck out all of the killer's blood if she found them. She then asked the team if they wanted to be her friend and invited them to a tea party, prompting Luke and the player to leave.

Bathsheba was spoken to again about the teacup of bigfoot blood. She claimed that Bigfoot had given it to her voluntarily and that she would have never hurt him. Since Chief Arrow said that vampires could not have human blood, Bigfoot had given Bathsheba his blood out of generosity as he was closer to a human.

Bathsheba was found to be innocent after the team incarcerated Elwood Grimes for Bigfoot's murder. Later, Gwen and the player searched for missing teenager Mina Reynolds. They found a scrap of Mina's dress which had been stained with Earl Grey tea, pointing them in the direction of Bathsheba. She claimed that she did not know anything about the kidnapping and that fellow vampire Fabien de la Mort had given her the scrap, prompting the team to interrogate Fabien.

Bathsheba became a suspect again after Gwen and the player found her fan at the crime scene. After being told about the murder, Bathsheba broke down, lamenting the fact that everyone was leaving her. She called Dr Aculus her savior, revealing that he had adopted her after her original coven had been slain. She then left, telling the team that she was hungry.

Mid-investigation, Bathsheba approached the team and savagely bit Gwen. After Gwen brandished a wooden stake at her attacker, vampire Pierce Cromwell pleaded with Gwen and promised that he would keep Bathsheba under control. Ben put Gwen on bed rest, telling the team that she had not been turned into a vampire. Luke assumed the role of the player's partner.

Bathsheba was spoken to again about Dr Aculus killing her original coven. She told the team that she had discovered that Aculus had lied to her for centuries. When she asked him why he killed her coven, Aculus claimed that he did not remember, enraging Bathsheba. She told the team that she had wanted to bite Aculus' head off, and then threatened to bite the team's heads off if they did not leave her alone.

Bathsheba was found to be innocent again after the team incarcerated Eric Zwart for Dr Aculus' murder.

Bathsheba became a suspect for the third time after Luke and the player found her hair ribbon at the crime scene. She was excited to see the player and revealed that she had seen the chupacabra, the murder weapon, earlier that day. Luke convinced Bathsheba to tell the team if she saw the chupacabra again before she left.

Bathsheba was spoken to again about her hair being on the chupacabra. She told the team that she had seen the chupacabra about to attack the victim that morning and she had tried to stop it, but failed. She claimed that the sunlight was too harsh for her, causing her to go into hiding and preventing her from seeing the murder.

Bathsheba was found to be innocent for the third time after the team incarcerated Susan Etter for Paul's murder. Later, Luke and the player asked Bathsheba about the malevolent force in the Southwest. She revealed that Dr Aculus had told her about the force and mentioned that the only other person who knew about the force was an old lady. This old lady turned out to be Navajo elder Haseya Roanhorse.

Bathsheba became a suspect once again after Luke and the player found a photo of her with the victim. She showed off her costume as Gwen to the team, claiming that the supernatural ball was better than Dr Aculus' "boring" vampire ball. When Luke told her about the murder, she was shocked, mentioning that she had nicknamed Ronnie "Wolfy". She told the team that Ronnie had parked his van out front, prompting the team to investigate Ronnie's van.

Bathsheba was spoken to again about her tearing the victim's costume. She revealed that Ronnie had tried to make a pass at her, persisting even when she refused him. Lashing out, she pushed him away, ripping his costume in the process. She contemplated flashing her teeth to scare him, but decided against doing so. She then told the team that she was glad that Ronnie was dead.

Later, Bathsheba broke into Gwen's trailer looking for a hat to complete her costume, causing a fight to break out between Bathsheba and Gwen. Luke managed to defuse the situation and persuaded Bathsheba to go back to the ballroom.

Bathsheba was found to be innocent once again after the team incarcerated Wendall Goh for Ronnie's murder.

Bathsheba became a suspect for the fifth time after Luke and the player found her message of condolences to Gwen regarding Dolores' murder. Initially attempting to catch an alligator, Bathsheba called Dolores a "pain" and explained that she had felt bad for Gwen, so she sent her the postcard. Since she knew that Gwen liked puzzles, she tore up the postcard and hid it in Gwen's trailer. Bathsheba then resumed her attempt to catch an alligator, telling the player that if she caught one, she would name it after them.

Bathsheba was spoken to again about her trapping Dolores in a cage. She admitted to hunting Dolores in order to teach her a lesson that it was better to be a "good" hunter, like the player. When Luke asked how Dolores escaped the cage, Bathsheba revealed that she had been forced to release Dolores, who had forgotten her camera. Bathsheba tossed said camera into Gwen's trailer as a souvenir.

Mid-investigation, Gwen uncharacteristically lashed out at Bathsheba, believing her to be the killer, which she denied. When Luke came to defuse the situation, Bathsheba ran away to hide deeper in the swamp, calling Gwen "scary", forcing the hunter to think about her actions.

Bathsheba was found to be innocent for the fifth time after the team incarcerated Morgana Blackhawk for Dolores' murder. 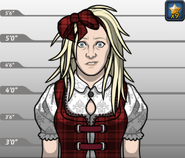 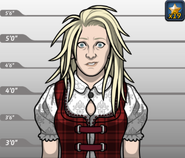 Bathsheba, as she appeared in Gut Out (Case #7 of Supernatural Investigations). 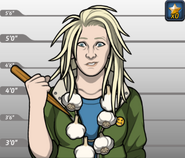 Bathsheba, as she appeared in Niagara Fallen (Case #22 of Supernatural Investigations). 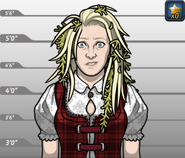 Bathsheba, as she appeared in The Hunted Hunter (Case #28 of Supernatural Investigations).
Add a photo to this gallery

Retrieved from "https://criminalcasegame.fandom.com/wiki/Bathsheba?oldid=535541"
Community content is available under CC-BY-SA unless otherwise noted.