Batbayar (Mon: Батбаяр) was a suspect in the murder investigation of his boyfriend, satellite engineer Andrei Beloglazov, in Horseback Mountain (Case #17 of World Edition).

Batbayar is a 25-year-old tour guide who had been dating Andrei. He has black hair and a goatee, along with freckles. He also wears a red shirt saying "Genghis Khan Tours" under a brown fur-lined jacket. It is known that Batbayar knows sword fighting, rides horses and drinks salty tea.

Batbayar became a suspect after he was identified by the player and Carmen on a clipboard of him and the victim. He was shocked and saddened at hearing about Andrei's death. He explained he met the victim on a tour he was giving, saying he was so curious about Mongolia's history and culture, not to mention the first openly gay man he ever met. Batbayar went on to say the two of them became romantically involved, and that he never thought he would find someone who would make him feel the way Andrei did.

Batbayar was spoken to again regarding a message he sent to the victim on a plane ticket asking not to leave him. He explained how the two of them did everything together, such as Andrei watching him in sword practice and bringing him salty tea afterwards. But Batbayar felt he was just a fling to Andrei, saying the victim intended to leave and never come back.

Despite that, Batbayar was found to be innocent after the team incarcerated Tsetseg for Andrei's murder. 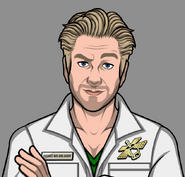 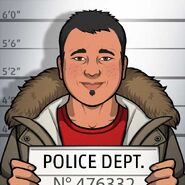 Retrieved from "https://criminalcasegame.fandom.com/wiki/Batbayar?oldid=408041"
Community content is available under CC-BY-SA unless otherwise noted.