Bart Williams was a suspect in the murder investigations of junkie Dan Broke in The Dockyard Killer (Case #4 of Grimsborough) and Russian mafia head Anton Levin in A Russian Case (Case #5 of Grimsborough).

Bart is a 23-year-old police informant with green eyes and messy black hair. He is seen wearing a white T-shirt under a light red jacket with white furs on the collar and a skull badge on the right side of his jacket. It is known that Bart is left-handed.

Bart was a police informant who told Jones and the player that he lived in a backstreet where Bulldog worked. He knew that Bulldog had sold drugs to Dan Broke and Sally Stone. He let the police know about this and they investigated. Later, Bulldog was arrested after all the proofs were against him.

In the Additional Investigation of the case, he told the team he had lost his wallet in the backstreet, and wanted it back because he was scared of what the Vipers could do to him. The team found his wallet and also a picture of Salvador Cordero in it. When Bart was asked about the photograph, he said it was a photo of the new leader of the Vipers' gang.

Bart returned again as a suspect and informed the team about some activities of their suspects. When the team asked him if he knew something else, Bart said that he saw someone dropping some stuff into the sewers outside the restaurant and running away. Later, the team found his number phone in Mikhail Levin's apartment, and questioned him about it. He said that Mikhail was one of his best clients and that he needed a fix to relax.

Later, he informed the team some guys had robbed his action figure "Ripper Jade" and thrown it away at the sewers. The team found it and learned it was a limited edition. He had his doll back and also informed the team that Salvador Cordero was not getting along with Ash Bison, as Ash wanted to become the leader of The Vipers.

Bart did not made a physical appearance but it was revealed via a poster that he was a member of the University band which is called the Lone Roses. Their lead singer was called Olly Oliver who was murdered by their groupie, Mary Lou Hong. 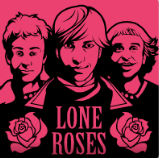 The Lone Roses: Bart on the left, Olly Oliver in centre and Riley Davies on the right. 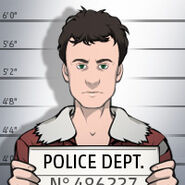 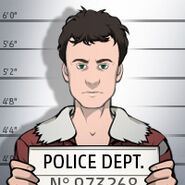 Retrieved from "https://criminalcasegame.fandom.com/wiki/Bart_Williams?oldid=439513"
Community content is available under CC-BY-SA unless otherwise noted.