Barnabas was a gunner for the HMS Highmore. He had short blond hair and blue eyes and wore a dirty navy blue tricorne hat with red lining. At the time of his death, he wore a dirty navy sailor's outfit with gold-lined navy blue epaulettes and gold buttons. Additionally, he sported a dirty red neckerchief. It is known that Barnabas knew how to tie knots and drank champagne.

Barnabas was found by Zara and the player on the port of Brava Island with his throat slit and no trace of blood being spilt. After the detectives found out he was killed on the HMS Highmore, Janis revealed that the victim's murder was not improvised due to his tied hands and feet. She then noted that the victim's throat was slit with a thin sharp blade but the killer did not leave any further evidence on his clothing or body. However, she was able to confirm that the victim's knots was hard to remove, meaning the killer knew their way around knot tying.

Barnabas was part of Captain Shadrach's crew. Shadrach was paranoid about Barnabas and believed that he wanted to replace him as captain. The ship's surgeon, Felix Humphrey, owed Barnabas a lot of money as he had lost multiple games of whist against him. Pirate Jorge de la Cruz used to be in the British Navy with Barnabas, but after Barnabas discovered that Jorge had become a pirate, he declared that Jorge had to die. Governor Uriah Haddonfield tried to expel Barnabas from the port after believing that he was trying to court his daughter, Isadora Haddonfield. However, Isadora was only trying to convince Barnabas to let her stow away on the HMS Highmore as she wanted to go out to sea. When she arrived on the ship, Barnabas panicked and refused to take her aboard.

The killer turned out to be Felix.

Felix told the team that after the party the previous night, Barnabas requested a shave from Felix. However, the boat rocked against the port, causing Felix's hand to slip and the straight razor to slit Barnabas' throat. Felix then hid the evidence of his mistake to protect his career. Captain Shadrach granted Felix clemency for the homicide; however, for his concealment of the crime, he was to be flogged and removed from the ship's roster. 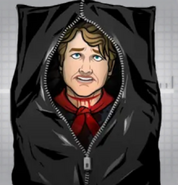 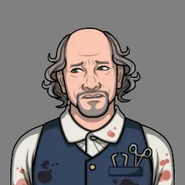 Felix Humphrey, Barnabas' killer.
Add a photo to this gallery

Retrieved from "https://criminalcasegame.fandom.com/wiki/Barnabas_Dycker?oldid=501871"
Community content is available under CC-BY-SA unless otherwise noted.