Bái Bai (Chn: 白白) was a suspect in the murder investigation of gang leader Fang Cheng in A Twist of Fate (Case #27 of World Edition).

Bai Bai is a 17-year-old street kid. He has short black hair covered underneath a blue winter cap and dons a maroon and black jacket. He also has a missing tooth. It is known that Bai Bai knows Chinese medicine, drinks chrysanthemum tea and practices Tai Chi.

Bai Bai was first interrogated after Jack and the player identified him on a picture of him with the victim. He was surprised to hear of Cheng's death, saying he was the closest he and several others had to a father, despite having to steal for him. He went on to say that the pick pocketing gang was more like a family to him, more so than his real parents who wanted nothing to do with him. To him and other street kids, someone having your back was most valuable no matter what had to be done.

Bai Bai was interrogated again about his blood found on a belt. He said there was one condition to being in Cheng's gang, they had to hand over everything they stole to earn their keep. However, the victim caught Bai Bai keeping some of the loot for himself. Despite trying to protect himself, Bai Bai was furiously beaten by the victim to near-death. He was glad that Cheng was dead, saying he lured kids with the pretense that he cared about them, but that he only ever cared about money.

Despite the near-death experience, Bai Bai was found to be innocent after the team incarcerated Fang Di Yun for Cheng's murder. However, he was interrogated again about an admission form with a symbol for SOMBRA. He did not know what the program was about, but they rejected him. Bai Bai heard about a program for orphans from an organization that offered a brighter future. Wanting to escape Cheng's gang, he applied for the program; but they turned him down for being too old and took the successful applicants to the Great Wall. Believing that SOMBRA was responsible for recruiting them, they went to the Great Wall to find more clues. 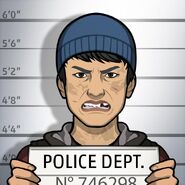 Retrieved from "https://criminalcasegame.fandom.com/wiki/Bai_Bai?oldid=477190"
Community content is available under CC-BY-SA unless otherwise noted.