In his first suspect appearance, he wears a red and black cape over a faded lavender suit with gold glitter lapels, a white open-collared shirt, and a red ascot. Additionally, he sports vampire fangs, a pumpkin brooch on his right lapel, and holds a black cane with a silver handle decorated with red orbs. It is known that Azeeb uses a spirit board, has watched A Wind-Up Satsuma and drinks Corpse Revivers.

After arresting Cindy McMinn's killer, Gloria and the player came to ask Azeeb about the presentation which he made about Rozetta Pierre. When being asked about this, Azeeb told the team that he had interviewed Rozetta when she came to the university to give a speech. After Gloria told him that nothing in the presentation was true information, Azeeb was shocked and said that he just wrote down what she had said. He then apologized to the team for causing unnecessary confusion.

Azeeb became a suspect after Gloria and the player found him locked in a coffin in the victim's bedroom. He explained that he was worried that whoever had killed Gregory would come after him next, so he hid himself in the coffin to protect himself. After being asked how he knew the victim, he explained that he had gone to high school with the victim.

Azeeb was spoken to again about the insulting t-shirt Gloria and the player had found. He revealed that the victim had made the t-shirt to insult him and that he had been bullied by the victim since high school. He told the team that he had gone to the party to confront the victim about the way Gregory had been treating him, but someone had gotten to Gregory first.

Azeeb was found to be innocent after the team incarcerated Adrian Lynn for Gregory's murder. But he was later interrogated by Jones and the player after they discovered that he had visited Rozetta in prison. Initially denying their claims, Azeeb slipped up and revealed that, not only was he a part of Ad Astra, but he had been asked to deliver a card to another member of the society. Jones and the player then headed back to Gregory's bedroom to search for the card.

Azeeb became a suspect again after Jones and the player used his agenda to track him down at the Grimsborough Rock Festival. After being confronted and told about the murder, he claimed that he was at the festival all night. Jones then interrogated him about the rest of Ad Astra, but Azeeb refused to cooperate.

Azeeb was spoken to again about his GritFit which (per Cathy) proved that he was present at the scene of the crime during the time of the murder. He claimed that had felt down after the Halloween party and went for a walk through the forest to clear his head. Jones then accused him of going to forest to tie up the victim, which Azeeb denied.

Azeeb was found to be innocent again after the team incarcerated Polly O'Brien for Kevin's murder. But he was later confronted about his participation in the murder when Jones and the player (per Amir) discovered that he had helped Polly carry the victim to the forest. Azeeb began to freak out, prompting Jones to offer him a deal if he started telling the truth. This prompted Azeeb to admit that all five members of Ad Astra (Polly, Dorothy Kix, Courtney Guerra, Lucius Roth, and himself) had killed Kevin by taking turns whipping him. He then claimed that he could prove it as their plan was on a tablet which they kept in their cave.

It was later revealed that Azeeb had been responsible for monitoring the professor's movements using his hacking skills. Azeeb was later given a plea deal and sentenced to 7 years in prison for being an accomplice to the murder. 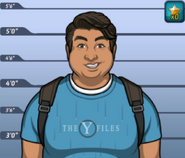 Azeeb, as he appeared in Final Cut (Case #37 of The Conspiracy). 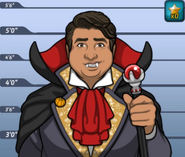 Azeeb, as he appeared in Trick or Treat (Case #41 of The Conspiracy). 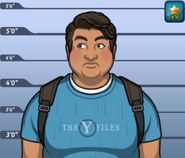 Azeeb, as he appeared in Lashing Out (Case #42 of The Conspiracy). 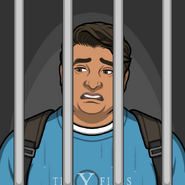 Azeeb, sentenced to 7 years in prison for being the accomplice to the murder of Kevin Charles. 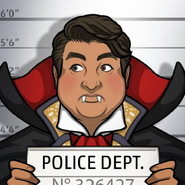 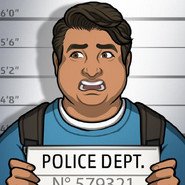