Prof. Ayush Patil (Hin: आयुष पाटिल) was the killer of university student Sunil Dhudwar and hundreds of others in Plagued by Death (Case #21 of the World Edition) after unleashing a deadly epidemic in Bangalore.

Ayush is a 35-year-old sociology professor. He has short black hair and glasses, and dons a burgundy shirt and a black suit jacket. He has an elephant brooch and a university badge on his suit. He also keeps a green pen in his pocket. It is known that Ayush eats spicy food and drinks mango lassi.

Ayush became a suspect after it was revealed he was the last person who called the victim on his phone. He was shocked to hear of Sunil's murder, saying he was one of his students; and though his main subject was science, he called him a bright boy. He called Sunil because he wanted to check on him with the recent disasters occurring, not knowing it would be the last time.

Ayush was interrogated again regarding a message he wrote to the victim on his essay. Considering the underlying meaning behind the message, Marina offered to speak to the professor alongside the player. He said that while Sunil was smart when it came to science, he felt he knew nothing about sociology. Ayush said he believed he should be brilliant, but nothing he did showed him he understood and Ayush expected better from him.

In the end, Ayush was found to be responsible for killing Sunil; as well as for unleashing the plague that struck Bangalore. Ayush denied involvement at first but soon admitted. Ayush was worried about the overpopulation in the world. Sunil told him about the virus. Taking this and the recent disasters as a sign, he got access to the virus in the university laboratory and unleashed it on Bangalore. Ayush said that he did not bother in finding a cure because his mission was complete.

In court, Ayush felt no remorse about the loss of hundreds of lives due to his epidemic. Judge Adaku issued him a lifetime jail sentence. 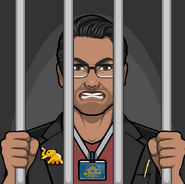 Ayush, sentenced to life in jail for the murder of Sunil Dhudwar and the deaths of hundreds of people who died of the epidemic he started. 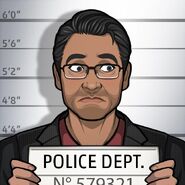 Retrieved from "https://criminalcasegame.fandom.com/wiki/Ayush_Patil?oldid=433682"
Community content is available under CC-BY-SA unless otherwise noted.