Ayden Young was a suspect in the murder investigation of scout master Connor Sullivan in No Smoke Without Fire (Case #29 of Grimsborough).

Ayden is a 12-year-old boy scout with blond hair. He wears a standard tanned green scout's uniform with three badges, a purple Fleur de Lys, and yellow neckerchief. It is known that Ayden knows First Aid gestures and eats chocolate.

Ayden was a young scout whose camp leader was Connor Sullivan, the victim. During the annual Scout Survival Camp, Connor was found tied to a bonfire by a group of his young scouts, including Ayden. After investigating the murder scene, Jones and the player interrogated Ayden, who was very scared by the death of his chief, and started crying. The team then calmed him down and asked him if there were people who did not like Connor. He answered that there were a lot of people who did not like Connor and that the victim always used to get into fights. He also said that Connor was really scary sometimes and that he used to get very angry about things. Ayden then told the team that he had seen Connor the previous day, fighting with James Savage, a hunter who lived nearby.

Later, while the team were discussing about the case in the station, Ayden came in and started crying. When asked what was wrong, Ayden told the team that his mom was very shaken up by the death of Connor and that she could not stop crying about it. For this reason, he wanted the team to check up on his mom, Charlotte Young, who was a friend of Gertrude Piccadilly, and was in Gertrude's tea parlour at that time. Ayden also requested the team to take him to the tea parlour with them, since he wanted to sell some of his scout cookies.

The team then took Ayden to the tea parlour and searched the place for clues. After investigating thoroughly, they found a torn paper which, upon being repaired, turned out to be a drawing of a fire truck. Since the drawing had Ayden's name under it, the team interrogated him again. After seeing his drawing, Ayden thanked the team and told them that he had drawn it for Gertrude after his First Aid training. He then said that Connor was always rude to the firemen, and the victim had said that if it was up to him, the scouts would not have got their First Aid badges. He had then torn Ayden's drawing to pieces just to be mean. 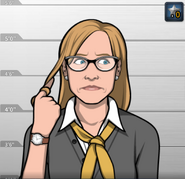 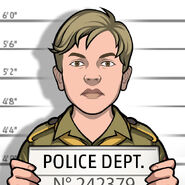 Retrieved from "https://criminalcasegame.fandom.com/wiki/Ayden_Young?oldid=415692"
Community content is available under CC-BY-SA unless otherwise noted.