Averly Worthington was a suspect in the murder investigations of her ex-boyfriend, university student Sunil Dhudwar, in Plagued by Death (Case #21 of the World Edition), monk Lam Ugyen in Peace and Dead Quiet (Case #23 of World Edition), and tuk-tuk driver Sandeep Sadhra in Insides Out (Case #24 of World Edition).

Averly is a 24-year-old American yoga student. She has blonde hair with light pink streaks in a ponytail, several necklaces, a turquoise bead, and earrings. She wears a white tank top.

In her first appearance, she has a university badge on her tank top. She also holds a matress and a water bottle. It is known that Averly eats spicy food and drinks mango lassi.

In her second appearance, she ditched her university badge, the water bottle and matress and now wears an orange dupatta over her tank top. It is discovered that she sews.

In her third appearance, she wears a blue ski suit. She also holds a trekking pole and a water bottle. It is revealed that she owns a Tibetan Mastiff and knows drum rituals.

Averly became a suspect after the player and Jack identified her from a diary found on the scene where the body was found. She was surprised to hear of Sunil's death, saying she and the victim took some classes together and went on a few dates. However, they broke up due to Sunil talking about science instead of meditating with her.

Averly was spoken to again regarding a blueprint of the lab on which wrote a message. She said she took the blueprint, but said it was not for the virus as Jack suspected. Averly took the blueprint in hopes of finding some drugs that would help her ascend to a higher plane, though she did not find any. Jack was suspicious and suspected she went in there and took the virus, but Averly insisted she did not take it.

Averly was found to be innocent after the team incarcerated Ayush Patil for Sunil's murder, as well as for unleashing the virus. However, she was spoken to again by the player and Carmen regarding her decision to give her money to Guru Om Padmasana. She said that Om had cleansed her due to the flashing light. She added that she came to India to follow in his footsteps, and he was in Bangalore by the temple to support the people during the virus epidemic. This prompted the player and Carmen to speak with Om regarding him taking his followers' money.

Averly became a suspect again after the player and Carmen came across her at the Tsechu festival site. She explained some people may have wanted to kill Lam due to him being unorthodox among monks, someone who wanted to get people out of their comfort zone. Averly said she personally was afraid of him, but wanted to help him with his arthritis. With her studies in Ayurvedic medicine, she hoped if she helped the victim, Om Padmasana would notice her.

Averly was spoken to again regarding her DNA found amongst the victim's fingernail clippings. She said while she was helping him with his arthritis, he grabbed her, scratching her skin and ripping the tunic she was wearing. When she told the Guru about the incident, he offered to mend her tunic, but she did not want to trouble him and sewed it back together herself.

Averly was found to be innocent again after the team incarcerated Tashi for Lam's murder. However, she was spoken to again by the player regarding Om's location, as the team had just discovered he was giving money to SOMBRA. She told them to stop trying to harass the Guru, and that he was not at the temple anymore. However, the Guru did not give a word to his followers yet about where he was going. When requested to tell Om's itinerary, she said even if she knew she would not say a word as she felt it was her duty to protect the Guru. Carmen thought if they could not find the Guru, then they could follow Averly to Om's location, and requested Elliot to keep tabs on her so they could find the Guru.

After the team followed her to Tibet, Averly became a suspect once again after her DNA was found on a yoga mat alongside Tibetan Mastiff hair, which the killer had. She was surprised to see Jack and the player again, and said to them that she did not know where Guru Padmasana was and that she was just a follower. Jack was adamant on her telling the team where the Guru is, but she then said she had to leave for the Tibetan Spa Resort, prompting the team to keep following her steps.

Averly was interrogated again regarding a photo of her attempting to kiss the Guru. She said it was not how it looked, knowing that photo would cause trouble. Averly explained to them she and the Guru finished a damaru drum session, and she ended up getting carried away in the moment. It was right then, the victim took a photo of it, and Averly was worried it would tarnish Om's reputation and cause a scandal.

Despite that, Averly was found innocent for a third time after the team incarcerated Warren Goodfellow for Sandeep's murder. 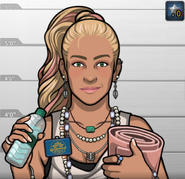 Averly, as she appeared in Plagued by Death (Case #21 of World Edition). 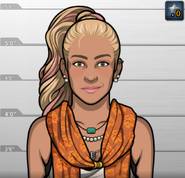 Averly, as she appeared in Peace and Dead Quiet (Case #23 of World Edition). 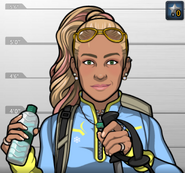 Averly, as she appeared in Insides Out (Case #24 of World Edition). 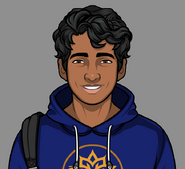 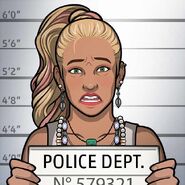 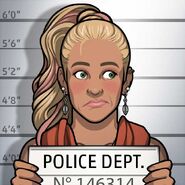 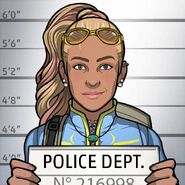 Averly featuring in a "Caption the Scene" promo.
Add a photo to this gallery

Retrieved from "https://criminalcasegame.fandom.com/wiki/Averly_Worthington?oldid=415501"
Community content is available under CC-BY-SA unless otherwise noted.