Aurora Osborne appeared as a quasi-suspect in Monkey Business (Case #16 of Mysteries of the Past).

Aurora is the 19-year-old sister of Somerset Osborne. She was experimented on by Ernest Picklebrain, making her glow blue. She has long platinum blonde hair with white roses. She wears a blue, long-sleeved dress with embroidered designs on it.

Lady Highmore led them to her study, saying Aurora preferred to stay in the dark. Aurora stepped forward, glowing in the dark. Katherine Woolf was eager for a story but Aurora stated that she did not wish to be interviewed and subjected to further mockery. Katherine apologized and made a deal with Aurora; if the team made a way to return her to her natural state, she would grant Katherine an interview. Aurora agreed to this and gave them a blood sample. With the sample, Dick was able to create a treatment to make her stop glowing as long as she kept taking it. Aurora tried the pills, which were successful in helping her stop glowing. 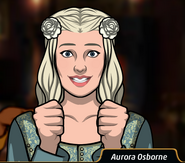 Aurora without her blue glow. 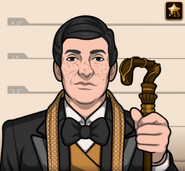 Somerset Osborne, Aurora's brother.
Add a photo to this gallery

Retrieved from "https://criminalcasegame.fandom.com/wiki/Aurora_Osborne?oldid=515041"
Community content is available under CC-BY-SA unless otherwise noted.