Aunty Huā (Chn: 花婶) was a suspect in the murder investigation of her nephew, rice farmer Guo Han, in The Killer in the Rice (Case #25 of World Edition).

Hua is a 53-year-old rice farmer. She has black hair which is partially covered by a red scarf. She wears a dark blue outfit with a brown flower motif. She is seen holding several paddies and wears a white conical hat. It is known that Aunty Hua drinks baijiu, wears rubber boots and plays Mahjong.

Hua became a suspect after the player and Carmen identified her on a picture of her and the victim. She was saddened at hearing about Han's death, saying they had been through enough tragedy. Hua explained to them that Han's parents moved to the city when he was a baby, as there was not much work in the village. They left Han to be raised by his aunt, and she said she did it the best as she could have.

Hua was interrogated again about some of her stuff being in a bundle belonging to the victim. She said she was too upset to explain that last time, but said he had been acting strange lately. Then she discovered he stole money from her, and decided to confront Han about it. Han explained to her he did it as part of a dare, but she was so angry she chased him out of the house and he ran away.

Despite her argument with the victim, Hua was found to be innocent after the team incarcerated Zhao Mei for Han's murder. However, she was spoken to by the player and Marina about Han's possible affiliation to SOMBRA after finding a statue with SOMBRA's symbol in his home. She said she had never heard anything about SOMBRA, but always thought that Mei acted strange. Hua said there was not much she could do to help, but she thanked the player for apprehending Han's killer. 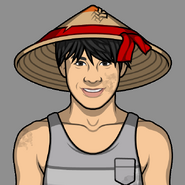 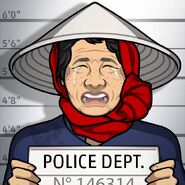 Retrieved from "https://criminalcasegame.fandom.com/wiki/Aunty_Hua?oldid=408045"
Community content is available under CC-BY-SA unless otherwise noted.