Augusta is a 10-year-old Sunny Beach juvenile of Hispanic-American heritage. She has shoulder-length black hair and sports a pink tiara on her head. Augusta wears a yellow-to-orange princess dress in support of a television show she loved in the past. She also wears a candy necklace and has ice cream stains on her face. It is known that Augusta is in contact with parrots and eats hot dogs and ice cream.

Augusta was a fan of a reality television show called "The Ice P Show".

When the team investigated the Ice Cream Kiosk crime scene for the first time, a locked cell phone was found at the scene, and after the cell phone was hacked, it was sent to Hannah for analysis. Alas Hannah determined thus the cell phone belonged to a kid named Augusta, who believed Ice P and Carly Lewis were having a real life fairytale in spite of the frantic text messages spotted by Hannah. This prompted the team to interrogate Augusta at the Ice Cream Kiosk.

Amy and the player wanted to talk about Ice P but Augusta refused to do so as she felt Ice P gave nothing but false testimonies about marriage as she witnessed Ice P saying that he did not love Carly any further, prompting Carly to hit Ice P with a feather-laden handbag. Augusta's discussion were grounds for Amy and the player to talk to Carly Lewis a second time.

The team investigated the Tiki Bar a second time and found a broken camera pieced back together. They did not hesitate to have Hannah analyze the broken camera, alas Hannah determined the photo Chief Marquez gave to the team was taken by Augusta. The team wanted to talk to Augusta about this peculiar move which infuriated Augusta to no end as she felt Ice P abandoned Carly for a lifeguard named Zack Taylor, which forced Augusta to believe fairy tales were nothing but lies.

Augusta was proven innocent at the climax of the investigation, but became very hard to deal with afterwards, giving Roxie, Amy, the player, Zack, and Carly headaches that were uncalled for. 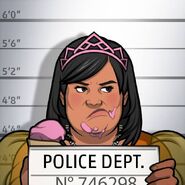 "Caption the Scene!"
Add a photo to this gallery

Retrieved from "https://criminalcasegame.fandom.com/wiki/Augusta?oldid=494456"
Community content is available under CC-BY-SA unless otherwise noted.