Audrey is a 22-year-old kitchen hand-turned-maid. She has ginger hair and dons a kitchen hand's outfit with a brown stain, and holds a wooden spoon in her right hand. It is known that Audrey uses mothballs.

Audrey became a suspect after the player and Isaac encountered her at the primary crime scene. She explained that she was busy doing some work for him, but when she returned she found him murdered and his signet ring was stolen. When it came to learning if she knew if anyone would want Max dead, she said she did not know much of his private affairs due to her being just a kitchen hand. But even with that, she felt the victim was a kind and generous gentleman, and questioned herself why anyone would kill Max.

Audrey was spoken to again about some pictures the victim took of her getting dressed. She knew the victim had taken an interest with her, but not to that extent. While it was nothing untoward, she knew it was clear Max had feelings for her and did not know what to do with them. And while Audrey was flattered by the victim's affections, she felt it would not be proper considering both of their social standings.

Audrey was later found innocent after the team incarcerated Sheila Black for Max's murder. She was later spoken to briefly again by the player and Dick about recent discoveries about the victim's late wife, who was revealed to be murdered. She was saddened to hear of these developments, and directed the two to the greenhouse in order to find more evidence.

Audrey was shown to have shifted jobs as she was the maid of Oscar Trefusis when District Attorney Justin Lawson and the player visited him. Trefusis was shown to be abusive of Audrey throughout his interrogation. He then told Audrey to fetch his wallet from the barber shop, but Justin and the player decided to do it for her.

The team later came back to talk to Trefusis and make him admit that he was in the immigrant exploitation scheme headed by Edward Whimple. After he admitted guilt, Audrey asked for her documents back as Trefusis took them from her (much like what he did to his former maid, Harriet Patrick). When Trefusis returned them due to Justin's demands, Audrey said that she was leaving the household as soon as possible. 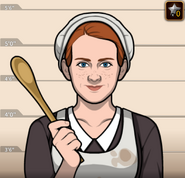 Audrey, as she appeared in Shear Murder (Case #5 of Mysteries of the Past). 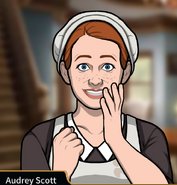 Audrey, as she appeared in In the Name of the Father (Case #6 of Mysteries of the Past). 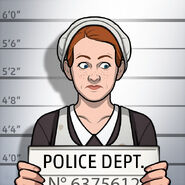