Aubrey is the 37-year-old wife of the victim with neck-length black hair and green eyes. She wears a V-neck grey and red dress. She also wears a golden bead necklace and pearl earrings. Furthermore, she is seen carrying a folder. It is known that Aubrey knows knots, plays polo and eats cinnamon rolls.

Aubrey was spoken to again about her angry voicemail to the victim. She explained that they were having trouble with adopting a child because when the adoption agent visited, Jordan had been under the influence of drugs. The agent then blacklisted them, meaning that they would never be able to have the family she wanted. She then brought up Nathaniel Earl, one of the victim's friends, which prompted Jones and the player to go speak with him.

Aubrey was found to be innocent after the team incarcerated Anuj Ghosh for Jordan's murder. 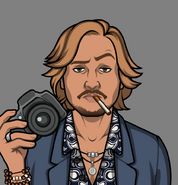 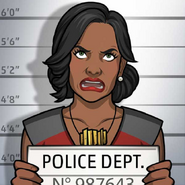 Retrieved from "https://criminalcasegame.fandom.com/wiki/Aubrey_Coprolite?oldid=411230"
Community content is available under CC-BY-SA unless otherwise noted.