Astrid Saucer was a suspect in the murder investigations of astronaut Tom Nelson in Dead Space (Case #43 of Pacific Bay) and "weird guy" Randolph in No Place Like Home (Case #45 of Pacific Bay).

Astrid is a 32-year-old UFO chaser. She has blue hair with a white streak and wears a denim vest over a white shirt. She wears alien badges on her vest and a necklace of Saturn.

In her first appearance, she has a red dust stain on her vest and it is known that Astrid is right-handed, eats space food and knows astrophysics.

In her second appearance, she wears night vision goggles on her head and it is discovered that she eats candy, had read Truth About Aliens and has allergies.

Astrid was brought into the investigation when the player and Amy found a picture of her and the victim. She and the victim grew up together sharing similar interest about proving the existence in aliens. Astrid believed that Tom's expedition to Mars would have proven that aliens existed. When the picture was brought up, she said that she was not a threat to the victim, but to the army because she believed in the existence of aliens.

Astrid was questioned again after the team found an article about the victim saying life on Mars is impossible. She wrote on the article saying that he does not deserve to go to space. When presented with it, Astrid admitted to being mad at the victim. They both trained to be astronauts but she ended up quitting because the army and PASA kept denying the existence of aliens. When Amy suspected her, Astrid replied saying she regrets sending that message and that she was not responsible for his death.

Astrid was later proven innocent when Brad Raybury was indicted for grand homicide and unauthorized use of military property.

The team ended up finding Astrid's keychain with her fingerprints on the scene where Randolph was murdered. She was shocked to hear about Randolph's murder, she remembered that she left the keychain at the fairground when she last saw Randolph. She was convinced that Randolph was an alien and all she wanted to do was help him return to his home planet.

Astrid was due for another interrogation after finding her diary saying that it felt bad to be human after what happened to Randolph. She explained that she wrote it not because she killed him, but because of what he went through at the military base. After learning about what Randolph was put through she was ashamed to feel human.

She was proven innocent for the second time after the team incarcerated Dr. Jarvis Donne for autopsying Randolph. 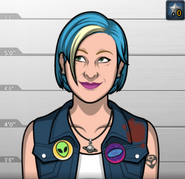 Astrid, as she appeared in Dead Space (Case #43 of Pacific Bay). 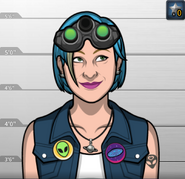 Astrid, as she appeared in No Place Like Home (Case #45 of Pacific Bay). 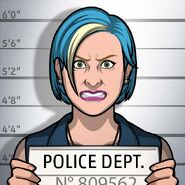 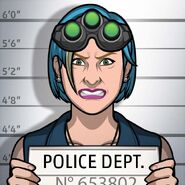 Retrieved from "https://criminalcasegame.fandom.com/wiki/Astrid_Saucer?oldid=415697"
Community content is available under CC-BY-SA unless otherwise noted.