Ashley Howard was a suspect in the murder investigation of sorority paintball team captain Sam De Witt in Deadeye (Case #39 of The Conspiracy).

Ashley is an 18-year-old student at Grimsborough University. She has long blonde hair with a blue streak and has a silver nose piercing. She wears a blue Iota Psi Omega tank top stained with yellow paint. Additionally, she sports a peace badge above her left lapel. It is known that Ashley is a sharpshooter, has read The Art of War and drinks Blast-Off Brews.

Ashley became a suspect after Gloria and the player (per Ramirez) found out that she had given the victim a pendant necklace. The team then talked to Ashley, who told them that she did not believe Sam was dead. Ashley then said that Sam was the person who helped her feel less intimidated when joining the sorority, got her to join the paintball team and also taught her to shoot. In the end of the conversation, Ashley told the team that she had no idea who could wish the victim harm.

Ashley was spoken to again after the team found a men's restroom placard, on which someone had written the word "Ashley's room". After being asked about this, Ashley told the team that Sam was the one who wrote the sign and put it on Ashley's bedroom door, as she had freaked out after hearing from Ashley that she was transgender. Ashley then said that although she and the victim were best friends when Ashley first went to the university, Sam began to discriminate her and make her life hell. Gloria then hoped that Ashley had nothing to do with Sam's murder.

The team then found out that Ashley was innocent for the murder as they discovered that Monica Pozie was Sam's killer. 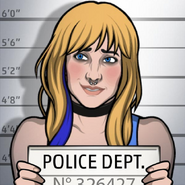 Retrieved from "https://criminalcasegame.fandom.com/wiki/Ashley_Howard?oldid=523365"
Community content is available under CC-BY-SA unless otherwise noted.