Ashley F. Collins was a suspect in the murder investigation of young woman Daisy Thompson in The Last Supper (Case #17 of Grimsborough).

Ashley is the 29-year-old assistant of Gabriel Thompson, the victim's husband. She has blue eyes and black medium-sized hair combed mostly on her left side. She wears gray transparent glasses. She also wears red lipstick and nail polish, and is seen wearing a black skirt and a white shirt with the first button undone and holding a cell phone in her left hand. She has a detergent stain on the right side of her shirt. It is known that Ashley uses detergent and wears nail hardener.

Ashley was called into the investigation by the police as soon as they managed to find a chocolate box in the victim's kitchen, which had a message for Gabriel inside it, written by Ashley herself. Ashley claimed that she sent the chocolate box for Gabriel since he had signed a big contract with a client.

Mid-investigation, the detectives discovered that Ashley actually had an affair with Gabriel, and that she was one of the reasons why Gabriel and Daisy did not love each other anymore.

Ashley was found to be innocent after Valentine Montgomery was incarcerated for Daisy's murder. Post-trial, Ashley and Gabriel got engaged and Gabriel presented Daisy's wedding ring to her. 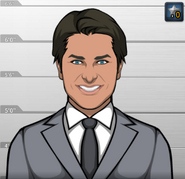 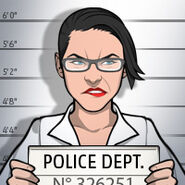 Retrieved from "https://criminalcasegame.fandom.com/wiki/Ashley_Collins?oldid=408032"
Community content is available under CC-BY-SA unless otherwise noted.