Ash Bison (1978–2018) was the victim in Byte the Dust (Case #14 of The Conspiracy), prior to which he was a suspect in the murder investigations of teenager Rosa Wolf in The Death of Rosa Wolf (Case #1 of Grimsborough) and Vipers leader Salvador Cordero in Into the Vipers' Nest (Case #11 of Grimsborough).

Initially appearing as the 35-year-old subordinate-turned-leader of The Vipers street gang, Ash had neck-length black hair and donned a blue cap and a black jacket over a white T-shirt with a bullseye drawn on it. He also sported a tattoo of The Vipers logo on his neck.

In his first appearance, it is known that Ash was right-handed.

In his second appearance, he had an oil stain on his jacket and it is discovered that Ash was asthmatic and chewed gum.

At the time of his death, now 40 years of age and owner of the arcade game Double Vipers, he was seen with shorter hair and was wearing a green beanie, a white-and-teal T-shirt, and a pair of black pants.

The Death of Rosa Wolf

Ash was not interrogated during the case, but after the team arrested Matt Barry for the murder, Jones and the player tried to interrogate Ash for information regarding The Vipers but Ash refused. This prompted the team to investigate the city's entrance for any trace Ash might have had left behind when he was arrested. The fingerprints on the gun found matched Ash's (thanks to Alex), and the team thus hurried back to make him cooperate, but Ash was not willing to do so, even with fingerprints on a hand gun he dropped—grounds for the team to temporarily lock him up.

Ash became a suspect again after the team found his dog tag in a toolbox at the crime scene. Upon interrogation, he said that he was not saddened by Salvador's death since he was dumb and since he kept triggering his asthma for laughs.

Later on, Tony Marconi spilled that Ash had become The Vipers' new leader after Salvador's death. Ash admitted he was happy to be the new boss but kept in mind that Tony was the true boss of the district.

Ash was found disemboweled in front of the Skulls Microbrewery on Bronson Lane. Per Martine, the fatal incision was precise and deep, severing a number of vital arteries, causing Ash to die within minutes. Although the killer was swift, they were sloppy as Martine was able to find a splash of brown liquid on the victim's shirt; the liquid turned out to be a combination of caffeine and turmeric, the main ingredients of turmeric spiced latte, a popular beverage in The Greens. Martine thus concluded that the killer drank turmeric lattes.

A blood-stained razor was found at the crime scene which Rupert and Amir would go on to identify as the murder weapon. The two also managed to find a mixture of diphenhydramine and melatonin on the razor's handle, both components of sleeping medication for those with insomnia. This proved that the killer suffered from insomnia.

Ash were friends with microbrewer and former Skulls leader Troy Cassidy until Ash had offered Troy a new supplier for Troy’s microbrewery, which Troy later found out was actually stolen goods. Ash was also suspected to have hijacked and robbed an armored truck by Officer Tim Cooper, who believed that leopards never changed their spots. Ash had also demanded for his friend and video game creator of “Double Vipers”, Big Baby to do changes with the game, even playing the “gang leader card” despite the Vipers being disbanded. Ash had dated Joy Schneider, who had planned to leave Ash because she wanted him to choose a life with her or a life with crime. Ash also had a long-estranged daughter, who was revealed to be arcade employee Kaitlyn Flynn, who had wanted to know her father but was ignored.

The killer turned out to be Joy.

Upon admitting to the crime, Joy said that Ash was cheating on her with a young woman that he was regularly meeting with in the arcade. When she confirmed that Ash was seeing Kaitlyn, the detectives informed her that Kaitlyn was in fact his daughter and not his mistress. She then began to feel remorse, saying that Ash had never told her about Kaitlyn. Judge Powell sentenced her to 20 years in prison. 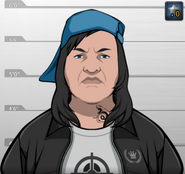 Ash, as he appeared in The Death of Rosa Wolf (Case #1 of Grimsborough). 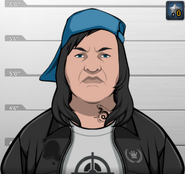 Ash, as he appeared in Into the Vipers' Nest (Case #11 of Grimsborough). 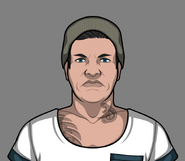 Ash, as he appeared in Byte the Dust (Case #14 of The Conspiracy). 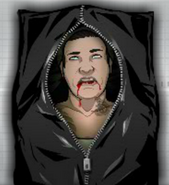 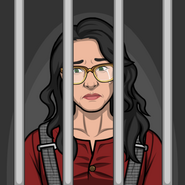 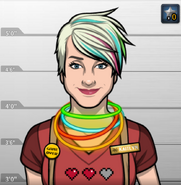 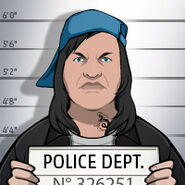 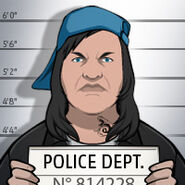 Ash in a promotional piece of artwork for the game.

Ditto.
Add a photo to this gallery

Retrieved from "https://criminalcasegame.fandom.com/wiki/Ash_Bison?oldid=489909"
Community content is available under CC-BY-SA unless otherwise noted.