Arthur is a demon assuming the guise of a 34-year-old novelist.

In his human form, he has brown eyes and short, wavy black hair and sports black glasses. He wears a dark blue shirt under a red plaid jacket with two pockets and a white fur collar. He is also seen holding a stack of documents.

In his demon form, he has dark blue skin, pointed ears, wings and red eyes. He is bald and sports a pair of black horns.

In his first suspect appearance, it is known that Arthur eats trail mix, wears hiking boots and uses bug repellent.

In his second suspect appearance, it is discovered that he is scared of the dark and listens to Billie Kelson.

In his third suspect appearance, Arthur wears a pair of camouflage gloves and a gray scarf. It is revealed that he eats waffles, uses snowshoes and plays Dragons & Dungeons.

In his first quasi-suspect appearance, he ditches the gloves and the scarf from his previous appearance.

In his third quasi-suspect appearance, he ditches the stack of documents.

Arthur became a suspect after Luke and the player found a signed copy of his novel at the bigfoot museum. After talking about Arthur's novels, Luke brought up a hypothetical dead bigfoot, prompting Arthur to reveal that he was planning to write a bigfoot series one day.

Arthur was spoken to again about his "bigfoot problem". He revealed that the fans had denounced his latest book as cruel to the image of Bigfoot. His publisher had arranged a stunt for him to go into the wood to "research" bigfoot, threatening to drop Arthur if he did not go. On the walk, he saw an actual bigfoot acting gentle as could be, contradicting his book. In order to resolve his problem, he needed to revise the entire series in order to make the evil bigfoot an anomaly, which would take months.

Arthur was found to be innocent after the team incarcerated Elwood Grimes for Bigfoot's murder.

Arthur was spoken to again about his gag order from Fielding. He informed the team that he had bumped into Fielding several nights ago and had gotten drunk with him. Fielding started to tell Arthur about his life, prompting him to jot it down as he thought that Fielding's story would be an interesting idea for his new season of Weirder Stuff. However, Arthur received a gag order from Fielding's lawyers. When Luke asked if Fielding had mentioned Abigail Riley or ghosts, Arthur claimed that they had not been mentioned.

Arthur was found to be innocent again after the team incarcerated Axel Bross for Fielding's murder.

Arthur became a suspect for the third time after he ran into Gwen and the player at the film set. He informed the team that he was at the set as the studio had wanted him there for a publicity stunt. He then told the team that he did not know the victim well and hoped that the team would figure out who had killed him.

Arthur was spoken to again about him being angry at the victim. He believed that Rex was portraying the character of Stanislav Yakovich completely wrong, playing him as a hackneyed, stereotypical buffoon instead of charismatic and suave. He then told the team that nobody meddled with the integrity of Weirder Stuff.

Arthur was found to be innocent after the team incarcerated Ruby Rees for Rex's murder.

After arresting Wyatt Ewing's killer, Priya called Luke and the player to inform them of her suspicions that Arthur was the demon that alpha werewolf Annette Strong had made an alliance with. After they found his diary, they discovered (per Hope) that he had written about a magical tree at Yellowstone. Following this, they confronted Arthur about his demon identity. Initially denying his true identity, Arthur admitted that he was a demon and told the team that he had been keeping an eye on them ever since they first met. He warned the team that there was more to demons than they knew, revealing that he was not the one who had been summoned in Amarillo five years prior. Arthur warned the team that the magical tree was dangerous and urged them to drive as far away as they could, before teleporting away.

After discovering the identity of Annette Strong's killer, the team confronted Zeke in his demon form. Zeke had the upper hand on the team, but in the middle of their confrontation, a mystery demon appeared and banished Zeke to the Netherworld. The mystery demon turned out to be Arthur, who told the team that he needed to talk to them.

Arthur told the team that he had sent Zeke back to the Netherworld. He revealed to them that their minds were vulnerable to attack by any one of the demons roaming the Earth. Arthur told the team that he would only tell the team his purpose for being on Earth after they protected their minds from demon attacks. He suggested that they sought out a coven of witches in the Midwest, before teleporting away.

After arresting Sharon Decker's killer, the player accompanied Arthur as he informed Gwen that a demon was attacking her mind and scouring her thoughts. After Gwen told him about her visions of a war in the Netherworld, Arthur revealed that there had been a civil war among the demons that had ended with the demon queen's defeat. He explained that she was being attacked because she had made eye contact with a demon, making Gwen wonder who said demon could have been. Arthur then urged caution in dealing with the witches and revealed that he had heard rumors that they were kidnapping children.

After arresting Belinda's killer, witch Agnes Leek casted the mind protection spell on the team, absolving the demon from Gwen's mind. At the end of the investigation, Chief Arrow and the team were able to contact Arthur and finally ask him about the demon war without the risk of having their minds read.

Arthur informed the team that he had fought on the rebel side of the demon civil war. He was badly injured in the battle, and when he finally came to, he discovered that the rebels had succeeded in weakening the queen, who had been locked up in a magical cage and suspended somewhere between Earth and the Netherworld. However, he had heard rumors that the queen's supporters were planning on restoring her to power. When he started investigating the rumors, he learned that there were five keys that the demons needed to unlock their queen's cage. They already had four of them, including the tree core that Zeke had killed Annette for. Nobody knew what or where the fifth key was as the maker of the keys, rebel demon Rathimael, had been hunted down, tortured and killed years ago. However, Arthur's search had led him to discover that Rathimael used to live on the East Coast, so he advised the team to head East. 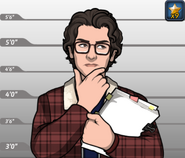 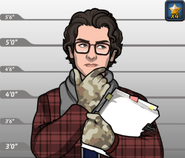 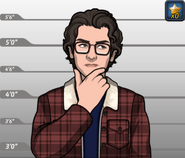 Arthur, revealing himself as a demon during the combat between the team with Zeke Davis. 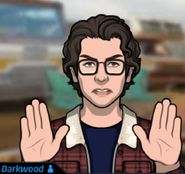 Arthur, as he appeared in Over the Edge (Case #18 of Supernatural Investigations).
Add a photo to this gallery

Retrieved from "https://criminalcasegame.fandom.com/wiki/Arthur_Darkwood?oldid=525183"
Community content is available under CC-BY-SA unless otherwise noted.