Arsha is a 27-year-old Bollywood star acting as the Goodwill Ambassador for the earthquake victims. She has long black hair, has a tilaka mark and a gold jhoomer with rubies on her forehead, and wears thick red lipstick. She wears a red earring.

In her first appearance, she dons a red and orange sari with matching veil, has a gold necklace, and gold bracelets on her left arm. She wears prayer beads around her neck and left arm. It is known that Arsha drinks chai tea and knows the Bhagavad Gita.

In her second appearance, she ditches the prayer beads on her left arm. It is discovered that she uses neem oil, listens to Bollywood music and plays cricket.

In her third appearance, she ditches her veil, and dons a blue sari with a lion badge and khata. It is revealed that she drinks butter tea.

Arsha was spoken to by the player and Jack about her tablet found in the Lotus Temple. According to Elliot, she made several appearances as the Goodwill Ambassador, and the victim was her contact from Rising Hope. She did not recognize the victim, saying she was focusing more on being a beacon of light to the those in New Delhi suffering. She exclaimed before leaving that she had no involvement in Donna's murder.

Arsha was interrogated again by the player and Carmen about the video of her giving a speech while the victim threw garbage at her. The victim warned Arsha on it that she knew where she truly came from. Arsha informed them that she was raised in a poor family, and the victim accused her of turning her back on her origins. Carmen questioned why that was bad as that could make her more popular with a "rags to riches" story; but Arsha said that it would be a dishonor to her family if her humble beginnings were revealed.

Arsha was found to be innocent after the team incarcerated Dr Sumati Misra for Donna's murder.

Arsha became a suspect again after the player and Carmen found her awards statue. Despite not recognizing the two of them, Arsha said she was working on the same film as the victim, but could not remember the victim. Being the lead star, she felt she did not have to remember every lowly extra on set murder or not, and then requested the two of them leave her.

Arsha was interrogated again regarding the mysterious and nonsensical changes made to her script. She confirmed the victim was changing her script in an attempt to upstage her. Arsha was furious at what Priya tried to do, saying no one makes her look unprofessional like that. She was even willing to do things she did not like just so that she could deliver the perfect performance.

Arsha was found to be innocent again after the team incarcerated Vikram Joshi for Priya's murder. Post-investigation, her dress for the upcoming cricket gala was returned to her by the player and Dupont at the request of Sanjay Korrapati. When returning the dress, Dupont praised Arsha for some of her work, which she felt flattered after hearing. She handed a signed photo for Sanjay, as well as an extra for Dupont, and thanked the player for returning her dress.

Arsha became a suspect again after the player and Jack found her CD signed by the victim. She was more surprised at them finding her pop CD than the murder, saying she was thankful she used her nickname. She did not know how Sandeep found a copy, as she believed that she burned all of them. Arsha said she arrived to Tibet to reconnect with nature and relax at a luxury hotel, but she ended up getting the victim with her old pop album, which she pointed out it was not relaxing.

Arsha was interrogated again about a photo of her in a rodeo. She was shocked at seeing that photo, believing that she had destroyed it upon seeing it. Arsha explained she was doing a press tour in the U.S., when her manager suggested she make an appearance at the rodeo to "fit in with the locals". Sandeep showed up with a printed copy of her at the rodeo and asked her for an autograph, and immediately upon seeing it she tore it up. She went on to say the victim intended to put the photo on his blog and she was worried if that happened, she at never get to another Bollywood contract again.

Arsha was found to be innocent for a third time after the team incarcerated Warren Goodfellow for Sandeep's murder. 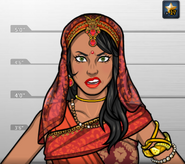 Arsha, as she appeared in Bad Medicine (Case #19 of World Edition). 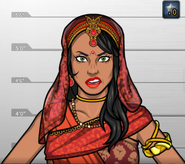 Arsha, as she appeared in Bloodywood (Case #22 of World Edition). 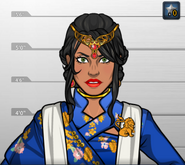 Arsha, as she appeared in Insides Out (Case #24 of World Edition). 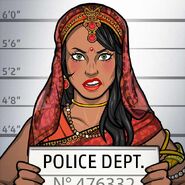 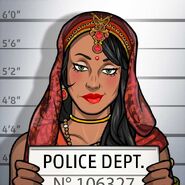 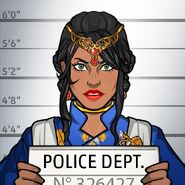 Retrieved from "https://criminalcasegame.fandom.com/wiki/Arsha_Raju?oldid=408042"
Community content is available under CC-BY-SA unless otherwise noted.