Arsenio is an 85-year-old jazz musician. He has short white hair and a mustache, and has a cigar in his mouth. He dons a sand-colored jacket with matching fedora over a red Hawaiian shirt with a cross necklace around his neck. It is known that Arsenio has read Rayuela de Ficciones, smokes cigars and drinks coffee.

In his quasi-suspect appearance, Arsenio wears a prison uniform.

Arsenio became a suspect when Carmen and the player found his jazz record at The King's Shadow, the place that was suspected to be the very birthplace of SOMBRA. He said back then, the place was bustling with life and many of the regulars became prominent figures in later life. For example, Alejandro Pratx spent the night there before sailing to Antarctica and Adolfo Herrera plotted his coup of Luzaguay there too. Due to playing music, he was not sure what they were discussing, and had no idea about the victim due to not getting out much.

Arsenio was interrogated again regarding a newspaper article of Michelle successfully defending him in court from a murder charge. He said he did not remember due to how long ago it was, and the fact that he was found innocent. Carmen said Michelle belonged to a criminal organization and she defended them in court, but Arsenio insisted he was not a part of any criminal organizations.

In the end, Arsenio was unmasked as El Rey, responsible for murdering Michelle, and leading SOMBRA on its various schemes. After trying to deny involvement, Arsenio admitted to the murder and being "El Rey", SOMBRA's leader. Arsenio said that he had killed Michelle because she had betrayed SOMBRA by providing information as X and then joining the Bureau as an agent. After Judge Adaku sentenced him to life in prison under maximum security, Arsenio said that he had already finished all the plotting he needed.

After the trial, Carmen and the player then talked to Arsenio in jail, where he pointed them to The King's Shadow for more information. They found a letter which (per Dupont) proved that Arsenio had passed on his position as El Rey to another person ten years prior. Upon further interrogation, Arsenio said that the Bureau had already met his successor and that SOMBRA's plans were going to unfold in the north soon.

Carmen and the player had to have another chat with Arsenio about an apparent meeting he had with Chief Ripley. Upon interrogation, Arsenio said that Ripley offered to fund SOMBRA; in exchange, SOMBRA would have to threaten the small kingdom of Grenadia on the southern border of Colombia, which had struck oil at the time. With the excuse of saving Grenadia, the US took part in the conflict and invaded the country, taking its oil. After that, the CIA tried to wipe SOMBRA out entirely. However, Arsenio faked his death and transferred SOMBRA's funds and the title of El Rey to Hector. 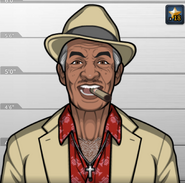 Arsenio, as he appeared in The King's Shadow (Case #48 of World Edition). 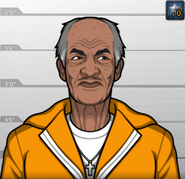 Arsenio, as he appeared in Down to the Wire (Case #55 of World Edition) and wearing the prison uniform. 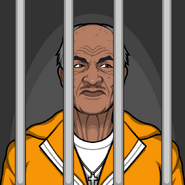 Arsenio, sentenced to life in prison under maximum security for the murder of Michelle Zuria and for SOMBRA's crimes. 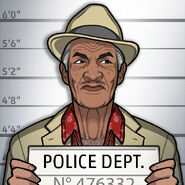