Criminal Case (mentioned)
Dr. Arnold Wharton, appearing as an unseen minor character in Criminal Case, was mentioned during the events of Overkill (Case #22 of Mysteries of the Past).

Arnold is a doctor in his late 60s. It is known that he is a widower who lost his wife in an accident a few years prior to the events of the case.

Eileen O'Malley explained to her daughter, Maddie, that she had engaged her to a marriage with a wealthy doctor. Not wanting to marry, Maddie and the player went to the apothecary and found Dr. Wharton's classified newspaper advertisement for a wife. The two talked to Lady Highmore, who said that Dr. Wharton was a wealthy man in his late 60s, who had lost his wife in an accident. Upon Highmore's suggestion, Maddie showed up with Charlie and convinced her mother that she was already engaged to Charles and therefore could not marry Dr. Wharton. 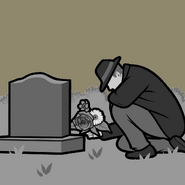 In-game artwork depicting Arnold.
Add a photo to this gallery

Retrieved from "https://criminalcasegame.fandom.com/wiki/Arnold_Wharton?oldid=535498"
Community content is available under CC-BY-SA unless otherwise noted.