April Liú (Chn: 刘艾普尔) was the killer of her husband, scientist Dr Henry Liu, in Extinguished (Case #58 of The Conspiracy).

April is a 39-year-old scientist and the wife of the victim. She has long brown hair and a mole on her right cheek. She dons a dark turquoise blouse under a white lab coat with a scalpel in the right breast pocket. Additionally, she wears a gold molecule necklace and black glasses. It is known that April works out, drinks cold brew coffee and uses antiperspirant.

April became a suspect after Gloria and the player after she arrived at the precinct asking about her husband. She told the team that she could not believe that he had been murdered and questioned what she would do without him. She said that Henry was a brilliant scientist and that they had a marriage of minds and bodies. When asked about his job, she told the team that he had started working on a secret project a year prior and had assumed that it was government contract. Despite being curious, she denied investigating the truth.

April was spoken to again about her broken wedding photo. She explained that after an argument with her husband, she had broken the photo. They had argued about his critical nature of her and how he constantly berated her. However, she drew the line at him criticizing her scientific work. When Gloria asked if their marriage was on the rocks, April said that despite Henry being a bully, he had plenty of redeeming features.

In the end, it was proven that April was Henry's killer. Upon admitting to the murder, April told the team she had found out that Henry was growing an entirely new humanoid species in the lab. When she confronted him, he said that his ultra-resilient and unkillable "neohumans" were an advancement to mankind. Unable to let her husband continue his unethical experiments, April followed Henry when he was going to work and bashed him over the head with a fire extinguisher. Judge Powell issued her a reduced sentence of 15 years in prison.

Later on, Gloria and the player interrogated April about Henry's project with S.A.R.A. head Denise Daniels about their new species of neohumans. She told the team that Henry had grown the neohumans over the period of one year and that he had submitted them to horrific tests in order to test their development. She then informed the team that he kept video footage of the experiments and that she had hidden his login details in their freezer as evidence. This prompted Gloria and the player to reinvestigate the Lius' house. 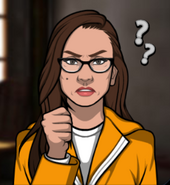 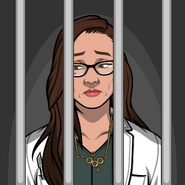 April, sentenced to 15 years in prison for the murder of Dr Henry Liu. 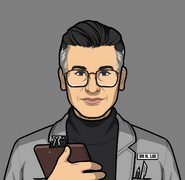 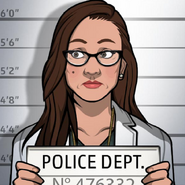 Retrieved from "https://criminalcasegame.fandom.com/wiki/April_Liu?oldid=493038"
Community content is available under CC-BY-SA unless otherwise noted.