The Elephant in the Room

Anuj is a 48-year-old chef of an Indian restaurant, The Elephant in the Room. He has black hair and brown eyes, as well a black mustache. He wears a chef's uniform consisting of a white double-breasted jacket with yellow and orange linings, as well his name sewn on in orange. He also wears an orange bandana and has two mosquito bites: one on his forehead and one on his chin. Furthermore, he is seen holding a spatula and some of his dishes. It is known that Anuj knows knots, plays polo and eats cinnamon rolls.

Anuj became a suspect after Jones and the player restored the competition plaque and found out that Jordan had won the curry-eating competition which was organized by him. The team then asked Anuj about the victim. He said that Jordan was a regular customer of his restaurant. And he was shocked when the team informed him of Jordan's death.

Anuj was spoken to again after the team found a security camera which showed his fight with Jordan, who said Anuj would pay for this. When being asked about he and Jordan's strong disagreement, Anuj explained that his food was authentic, but the victim had claimed it was a perfect alternative to laxatives. He also said that he's the same with his cooking, every spice had its place.

In the end, it was proven that Anuj was Jordan's killer. Upon admitting to the murder, Anuj explained that he had caught Jordan putting laxatives into his tikka masala. Angry at Jordan for sabotaging his business, Anuj chased him out with a baseball bat. Upon arriving on the broken bridge, he swung his bat at his abdomen, dealing a fatal blow. Not meaning to kill Jordan, Anuj then tied him to a stone and threw him into the flood, hoping the waters would wash away his sins. Judge Powell sentenced Anuj to 8 years in prison. 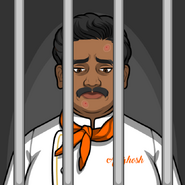 Anuj, sentenced to 8 years in prison for the murder of Jordan Coprolite. 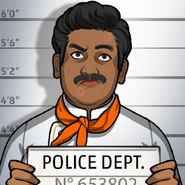 Retrieved from "https://criminalcasegame.fandom.com/wiki/Anuj_Ghosh?oldid=464713"
Community content is available under CC-BY-SA unless otherwise noted.