Annie is a 29-year-old member of the Ronald Rooney Fan Club. She has mid-length, curly auburn hair and dons blue wide-rimmed glasses with red polka dots. She wears a shirt patterned with yellow, white, purple and baby blue diamonds and teal sleeves and collar with a matching ribbon. Additionally, she sports a red and white "Ronald Rooney Fan Club" badge on her left lapel.

In her first suspect appearance, it is known that Annie is on a juice cleanse and reads Hearsay Weekly.

In her quasi-suspect appearance, her scarf and hair are noticeably disheveled, and she has prominent eye bags.

In her second suspect appearance, she changes to a purple patterned shirt with white sleeves and collar, and a matching white scarf. Her hair and scarf remain messy, and her shirt is covered in grease stains. It is discovered that she knows electronics, uses a Rolington typewriter and eats tofu.

Annie became a suspect after Gloria and the player came across a selfie of hers that depicted her as a fan of the victim. Initially crying when first approached, Annie confessed that her entire life revolved around the victim and that she was the president of his official fan club. Once again, she burst into tears and claimed that she didn't know what the meaning of life was anymore.

Annie was spoken to again about a sweater with the victim's face on it that she had torn up. She admitted that when she asked him for an autograph, Ronald laughed and said that he didn't take photos with "ugly" people. She then berated herself for being "ugly" and "fat", to which Gloria reassured her that she wasn't.

Annie was found to be innocent after the team incarcerated Yoshinobu Akagi for Ronald's murder.

After arresting Beckett Blanton's killer, Amir and the player went to the Hustle & Guzzle co-working space as they knew that some of the DreamLife VR players went there, and they wanted to ask them about how Rupert would get so hooked to the game. There, they found Annie, sitting, pale, and playing on the headset. They brought Annie to Martine to check up on her as she seemed sickly. According to Martine, Annie was weak and malnourished, and had a dangerously low blood pressure. Annie had also not been eating because she kept playing the VR game.

When they talked to Annie, she asked for her headset back. She told the cops not to worry about her as she was only skipping a few meals and she could afford to lose the weight. She told them that in the game, she was skinnier and prettier and she was also dating Ronald. As she was living the perfect life, she could forget about her day-to-day duties, including taking her medication. Amir and the player went to the cafe to fetch her medication, which they returned to her. Annie thanked the team, but refused to stop playing the game, instead opting to get Juniper to remind her to take her medication.

Annie was found to be innocent again after the team incarcerated Tim Cooper for Juniper's murder. 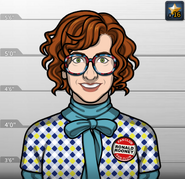 Annie, as she appeared in Shooting Star (Case #9 of The Conspiracy). 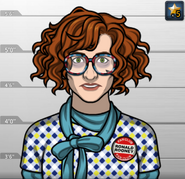 Annie, as she appeared in Buzz Kill (Case #16 of The Conspiracy). 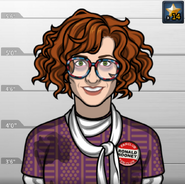 Annie, as she appeared in Game Over (Case #18 of The Conspiracy). 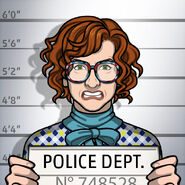 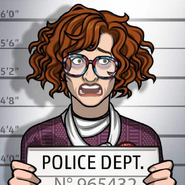 Retrieved from "https://criminalcasegame.fandom.com/wiki/Annie_Schmidt?oldid=442134"
Community content is available under CC-BY-SA unless otherwise noted.