Anne was the 16-year-old lady-in-waiting for Queen Catherine before becoming Queen of England after marrying Henry VIII. She has blue eyes and braided brown hair which is kept under a black headband with yellow frills in the center and adorned with golden jewels on the side. She wears a purple dress with a lining of golden fabric and golden lace and pearls. She also sports a golden piece of cloth draped around her, diamond earrings, and a pearl necklace with a "B" pendant. She also sports smallpox scars on her neck.

In her first appearance, it is known that Anne uses leeches, plays the lute and eats wild boar.

In her second appearance, it is discovered that she eats foie gras.

In her third appearance, she replaces her golden lace with a white lace instead. It is revealed that she drinks fig liqueur.

Anne became a suspect after Nebet and the player found her necklace at Houndsditch Passage, a street that was often frequented by the victim. She supposed that she had dropped the necklace when she had gone to feed the poor that morning with her Queen. When Nebet told her about the murder, Anne was shocked, informing the team that Catherine had had no enemies and was like a mother to her.

Anne was spoken to again about the victim comparing her to a harlot. She told the team that Catherine was paranoid that she was smitten by her husband, King Henry VIII, and that she was trying to seduce him. When Catherine accused her of adultery, Anne denied having relations with Henry.

Anne was found to be innocent after the team incarcerated Agnes Manners for Catherine's murder.

Anne became a suspect again after Zara and the player found her hairbrush in the banquet hall that the victim often performed in. She informed the team that she was in France to be trained. When told about the murder, she showed no sympathy for the victim and told the team that she paid him no heed.

Anne was spoken to again when the team found Triboulet's juggling club, which (per Orlando) was covered with English lace, thus meaning that Anne had encountered with the victim. Being asked about the encounter, she explained that one evening, she had been assaulted by Triboulet. After he had stolen her plate of foie gras, he lifted her skirt and spanked her bottom in front of King Francis I. Losing her temper, she bit his leg in an attempt to break free and hit him with his juggling clubs.

Anne was found to be innocent again after the team incarcerated Charles Ferrial for Triboulet's murder.

Anne became a suspect for the third time after Jack and the player found the sugar sculpture she had gifted to the bride and groom. She told the team that she was the victim's childhood friend and recalled how she and Fiore traveled to various palaces in their youths. When asked if she knew of anyone who was enemies with the victim, Anne claimed that Fiore was beloved by all.

Anne was spoken to again about her angry letter to the victim, where she branded Fiore as "SCUM". She revealed that she had not been invited to the wedding, despite believing that she and Fiore were best friends. To get her revenge, she hatched a plan to insert herself into the festivities in order to shine before the European nobility. She then claimed that Fiore was beneath Henry.

Later, Anne approached the team to apologize on Henry's behalf when he accused the team of being the deadly pall that had caused the deaths of both his late wife and his future wife. She then took him away in order to tend to his needs as he was a drunken mess.

Anne was found to be innocent for the third time after the team incarcerated Cardinal Cisneros for Fiore's murder. After the arrest, Anne approached Nebet and the player to inform the team that she was getting married to Henry. She requested that the team fashioned her a dress for the wedding. With help from Orlando, the team fabricated the dress.

After Nebet and the player gave the dress to Anne, she informed the team that Henry had hidden the Pope's Bible after he agreed to marry them due to his dispute with the Church. She requested that the team found the Bible. They later found the Bible in the wedding ceremony room.

At the end of the investigation, the team attended the wedding of Anne and Henry. The Pope announced them husband and wife and the newlyweds kissed. After the ceremony, Anne thanked the team for their help in making the wedding possible. 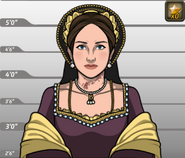 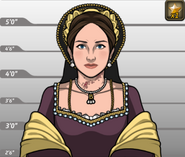 Anne, as she appeared in Till Death Do Us Part (Case #15 of Travel in Time). 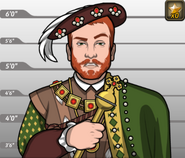 Henry VIII, Anne's husband.
Add a photo to this gallery

Retrieved from "https://criminalcasegame.fandom.com/wiki/Anne_Boleyn?oldid=533675"
Community content is available under CC-BY-SA unless otherwise noted.