Annabel Stewart was the killer of opera director Roland Vane in Snakes on the Stage (Case #50 of Grimsborough).

Annabel is a 22-year-old Opera understudy with long brown hair and a green jewel in a necklace she wears. On her hair, she wears a drama-themed hairclip. She also has a beauty mark above her lips. She is seen carrying a couple of song sheets and wears brown clothes. It is known that Annabel is an employee at the Opera, handles snakes and takes sleeping pills.

Annabel was an understudy at the Opera.

When Jones and the player found a dressing room key that had Annabel's fingerprints, she was called into the investigation regarding about the death of Opera director Roland Vane. Annabel claimed that Roland was a nice man even though they did not see eye-to-eye, and the key to the Opera was handled with care amongst the Opera employees. The team demanded to know as to why Annabel was in conflict with Roland regarding about the play "Madama Serpent", and that Annabel felt that she deserved the lead role more than anyone else since she trained so hard in spite of the director's decision. The team did not hesitate to probe the dressing room after talking to Annabel.

Annabel was interrogated a second time when a sheet with Roland's approval of Annabel in the leading role for "Madama Serpent" was found, but Annabel would not put up with the team's lies, but the police wanted to notate proof to Annabel. Annabel thought that Roland was going to give her a big break after she complained about having to handle snakes for the show, but it was used to calm her down, but felt that males did not keep their promises, but started to have mixed feelings after the conversation.

Annabel was told to report to the station only to know that she was under arrest after the player gathered enough evidence to prove her guilt. Moments before she was placed to court, Annabel thought that Roland gave Beatrice Vane (his wife) the lead role for "Madama Serpent" in an act of nepotism, as although Annabel thought she had the role but when Roland moved to Grimsborough and became director of "Madama Serpent", he fired Gerald Riverton and gave the role to Beatrice instead in spite of Annabel working so hard day and night. Annabel thought the only solution to Roland's suspected nepotism was to kill him and have a new director for "Madama Serpent". The only way Annabel would kill Roland undetected was to put sleeping pills in his tea, break the cage of the giant boa, and trap both Roland and the giant boa in the dressing room, lock the door from the outside, and flow out of the crime scene, but at the cost of losing her key and one of her jewels. Jones countered that Annabel should have talked to Roland instead of killing him, but Annabel had no patience in Roland, which explained why she made the fatal decision.

In court, Annabel felt that her career had to end because of her killing Roland, but Judge Hall countered that killing an innocent man to build such opera career was not the solution to stop such nepotism, as Annabel snapped that Beatrice was not talented at all.

Annabel was sentenced to 20 years in jail, with parole eligibility in 17 years for the murder of Roland Vane. Jones felt that Annabel's ambition and impatience drove her to murder Roland, and realized that the force was bound to run into people like Annabel in the line of duty. 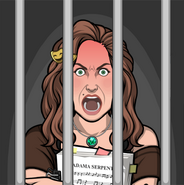 Annabel, sentenced to 20 years in jail with a chance of parole in 17 years for the murder of Roland Vane. 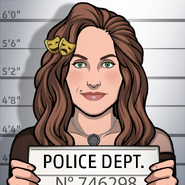 Retrieved from "https://criminalcasegame.fandom.com/wiki/Annabel_Stewart?oldid=408004"
Community content is available under CC-BY-SA unless otherwise noted.