Anna Jewell was the victim in Get Off Your High Horse (Case #40 of Mysteries of the Past).

Anna was a jockey who had red hair, blue eyes and freckles. At the time of her death, she wore a white shirt underneath a black suit jacket with yellow details, olive buttons, and a white handkerchief in her left breast pocket. She also sported a pale yellow cravat, earrings, and held a dark green whip with a brown handle.

Anna was found in the stables with her head bashed in. Per Dick, the killer began their attack with a blow to the back of her head before she turned around, allowing the killer to launch a full-frontal attack and pummel her to death. He also found traces of crumbs in the victim's head. As the crumbs came from macarons, the coroner deduced that the killer ate maracons.

In the grand enclosure, the team found a bloody stirrup hidden in a waiter's tray. Rose and Dick confirmed that the stirrup was the murder weapon. Dick noticed white smudges on the stirrup's strap, which turned out to be traces of sunscreen. As the sunscreen would have been transferred onto the strap while the killer bashed Anna's head in, the team was able to deduce that the killer used sunscreen.

Princess Eliza Rheinberg of Splichtenstein placed her bets on Anna after she claimed to be the best jockey, losing her money when Anna lost the race. Fellow jockey Milton Dobby disrespected Anna, believing that horse racing was a man's sport. Anna made friends with the jockey, Rahul Shah. She forgot about their friendship when she got famous and often ordered him around, angering Rahul. Lady Highmore had taken Anna as her protégée, making her a star attraction at a pre-race soirée, but Anna had humiliated her and Highmore at the party after she got very drunk at a party. Anna had fallen in love with Archie Rochester, but he rejected her advances, claiming she was too much of a commoner.

The killer turned out to be Eliza.

When she admitted to the murder, Eliza revealed her true identity was a poor flower girl named Eliza Fairfax. Later in life, she took on a princess persona. However, Anna, who was childhood friends with her, recognized her in a soirée. During a party, Anna began talking more and more as she got drunk. Afraid that her identity would be revealed, Eliza talked to Anna in the stables. However, her temper got the better of her, so she walloped her head with a stirrup until she died. Judge Lawson sentenced her to 18 years in prison. 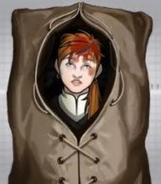 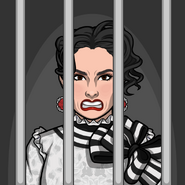 Eliza Rheinberg, Anna's killer.
Add a photo to this gallery

Retrieved from "https://criminalcasegame.fandom.com/wiki/Anna_Jewell?oldid=471455"
Community content is available under CC-BY-SA unless otherwise noted.