Anir was the 32-year-old leader of the Najwa nomadic tribe. He donned a red robe and a white scarf wrapped around his head. It is known that Anir rode camels and ate dates.

At the time of his death, his robe was yellow instead of red.

Anir was first interrogated after he led the player and Carmen to his camp, where Donald's body was discovered. He said the victim walked into his camp one night, so thinking he got lost in the desert, he and his tribe invited him for dinner. He explained it is the Najwa tradition to treat visitors generously though other tribes are not as accommodating. Carmen was curious as to why Donald was found in his camp dead, but Anir swore he and his people wished the victim no harm whatsoever. When asked about what they spoke of on that night, he said that the victim explained he was the CEO of SandOil. With the refinery not far from the camp, Carmen and the player went there to investigate.

Anir was spoken to again regarding a broken deep fryer which according to Lars, was littered with his fingerprints. He said that the victim wanted to bribe the Najwa tribe with it, much to Anir's dismay. When asked why, Anir explained the victim wanted to expand his business into the desert but could not do it without allies among the rebel tribesmen, so he wanted the Najwa to be his spies. However, he did not want to, especially for an electric kitchen appliance they could not plug in anywhere.

Anir was found to be innocent after Mama Yasmine was incarcerated for Donald's murder.

After a second visit to the bombed city, the team found a sword, which was filed as the murder weapon in situ. The sword had a message in Arabic that was revealed with dust and sent to Dupont for analysis. Unfortunately, he could not extract any information from the murder weapon because he collapsed after touching the blade, which was intentionally poisoned by the killer to attack the Bureau.

Sultan Mahmoud had issued a death warrant against Anir, but the Sultan claimed that it was one of his clerks who had signed it as he did not want to waste his time. Meanwhile, tribal strategist Omar Bahir had warned Anir against gradual radicalization of the Najwa tribe, but said he was too swayed by The Sword to be persuaded against it.

The killer turned out to be Omar, who was actually The Sword.

Omar revealed he had the mission of growing conflict and extremism across the Sahara. He then admitted he had "killed" Ripley and had Anir abduct Andrew to lure the Bureau into his trap in Iraq. Without revealing his reasons behind Anir's murder, Omar prepared to kill Carmen and the player with a poison grenade, only to be shot dead by Jonah from the distance. Most presumably, Anir's murder was yet another element of Omar's trap for the Bureau. 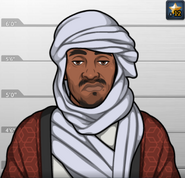 Anir, as he appeared in Death in the Desert (Case #8 of World Edition). 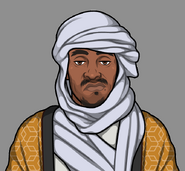 Anir, as he appeared in Die by the Sword (Case #12 of World Edition). 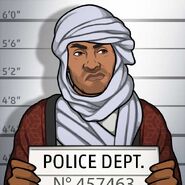 Retrieved from "https://criminalcasegame.fandom.com/wiki/Anir_Aznag?oldid=537704"
Community content is available under CC-BY-SA unless otherwise noted.