Anika Cross was a suspect in the murder investigation of her husband, property developer Jeremy Cross, in The Curse of Black Ridge (Case #3 of Supernatural Investigations).

Anika is the 37-year-old wife of the victim. She has shoulder-length black dreadlocks pushed back by a green bandana. She wears a white blouse with pink pinstripes. Additionally, she sports gold earrings and a necklace. It is known that Anika is left-handed and gambles.

Anika became a suspect after Luke and the player found a framed photo of her and the victim in Jeremy's office. Initially believing the team to be Jeremy's clients, she tried to redirect them to his office. When the team informed her about the murder, Anika revealed that she knew that Black Ridge would be the death of him. She then called the police, prompting the team to leave.

Anika was spoken to again about the team's discovery (per FBI Agent George Mathison) that she was a suspect in one of the previous murders in Black Ridge. She informed the team that, ten years ago, she had squatted in Black Ridge with a few of her friends on a gambling trip to Las Vegas. However, the trip was cut short when they awoke to find one of the party strangled. She told the team that the killer had never been found, but she blamed Black Ridge for the murder, saying that the town was cursed.

Anika was found to be innocent after the team incarcerated Rick Lewis for Jeremy's murder. 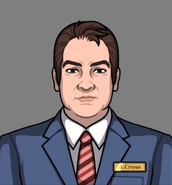 Retrieved from "https://criminalcasegame.fandom.com/wiki/Anika_Cross?oldid=523050"
Community content is available under CC-BY-SA unless otherwise noted.