Angus O'Brian was the victim in Spineless (Case #14 of Pacific Bay).

Angus was a local Irish priest and a bare-knuckle fighting champion residing in Inner City. He had ginger hair and green eyes. He donned a priest's uniform which consisted of dark blue robes, a black shirt with white collar and a crucifix pin on the right side of the robes. He also held a bible in his left hand.

Frank and the player found Angus floating strung up in the middle of the Saint Patrick's Day parade. They sent his body to Roxie, who deduced that the killer first tried to strangle Angus with a jump rope, confirming that the killer used a jump rope. The killer then forced him to ingest a large dose of helium, causing his lungs to explode. Roxie also noted that Angus' spine was missing.

Later, the team found a helium can at the parade site. After registering it as a murder weapon, they sent a green substance found on the can to Yann, who found the substance to be sediment coming from a green four-leaf clover, meaning that the killer wore a four-leaf clover.

Angus refused to give his brother, Colin O'Brian, a space to sleep in upon arriving in Inner City other than the yard of his church. Upon learning of the bare-knuckle fighting tournament where Colin was participating in, Angus began helping him exercise all in a plan to get him too drunk to wake up for the tournament. Angus also manipulated one of his competitors, Shelly Dulard, getting into a relationship with her until just before their fight, where he told her that he did not love her so she could lose the will to fight and give him the win. Angus also blackmailed Mark McKenzie with the secrets he gave out during his confessions in order to get steroids. Meanwhile, Russian community leader Nikolai Kamarov fixed the Angus vs Shelly fight and paid Angus to throw the match so that he (Nikolai) could bet on Shelly and give the image of winning against all odds; however, Angus refused after accepting the money, humiliating him.

The killer turned out to be Shelly.

Although she denied involvement, Shelly admitted to the crime. Shelly revealed that she felt cheated on when Angus used her love for him to win against her, so Shelly strangled Angus with a jump rope and then filled him with helium, blowing up his lungs. Judge Dante sentenced her to 20 years in jail.

Later, the team would learn that his spine was stolen by Mark McKenzie under orders from Rupert Snow, who wanted his spine transplanted in him to represent "the backbone of society" in his grotesque plan to end the community feud. 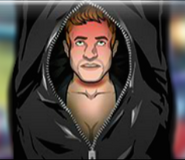 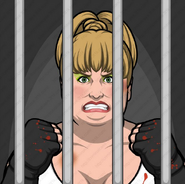 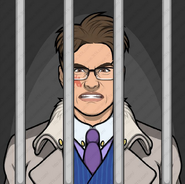 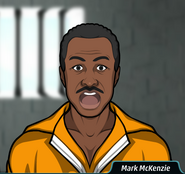 Mark McKenzie, the one who stole Angus' spine. 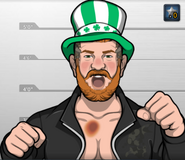 Colin O'Brian, Angus' brother.
Add a photo to this gallery

Retrieved from "https://criminalcasegame.fandom.com/wiki/Angus_O%27Brian?oldid=517950"
Community content is available under CC-BY-SA unless otherwise noted.