Angie Cortez was a suspect in the murder investigation of scuba diver Valerie Green in What Dies Beneath (Case #3 of Pacific Bay).

Angie is a 21-year-old partygoer of Hispanic-American heritage sporting long brown hair extending to her breasts with a beehive styled atop of her head. Angie wears pink hoop earrings, pink and brown eyeshadow, and sports glitter rhinestones on her lower eyelids. Angie also wears silver and gold necklaces on her neck, and sports a turquoise blue-pink party dress. It is known that Angie uses hand cream and drinks champagne.

Angie was interrogated for the first time when Amy and the player found a torn photo in the Big Mighty Yacht party boat, pieced it back together, and identified the tanned woman as Angie Cortez. Angie told the team she wanted to help Valerie get used to the party scene and even went far to state that party boats were the new idea in party going in Pacific Bay.

The second time Angie was interrogated was when the team found a phone in Ocean Shore's exotic waters, but with the help of Hannah, who was the only person in the force to pry through electronics even when a device was broken. Hannah was able to determine through the phone's memory that Angie hated Valerie, sending text messages of hateful nature, but furthermore, sent text flirts to Mighty Pete, prompting a second discussion with the young partygoer. Amy went ahead and accused Angie of false testimony at the expense of Angie lambasting the team for looking at what she considered "something behind closed doors." Amy required straightforward honesty and Angie responded that Valerie dated Mighty Pete but felt she deserved Mighty Pete more than Valerie did.

In the midst of Mighty Pete's indictment, Angie told Chief Marquez about Leah Davies trespassing the Big Mighty Yacht (in which Amy made clear it was still a crime scene), so the team took a look in the yacht and found a toxic waste barrel with pink liquid, only to find out by way of Yann it was actually a cosmopolitan cocktail mix made by Leah to change her ways on how she held maritime preservation meetings. Angie was shocked to know an overzealous eco-warrior was able to know the error of her ways and given that Leah was holding a gala, Angie opted to join the party and thanked the team for calming her down. 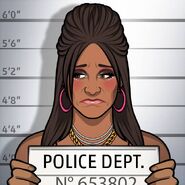 Angie featuring on the case's promotional flyer.
Add a photo to this gallery

Retrieved from "https://criminalcasegame.fandom.com/wiki/Angie_Cortez?oldid=437821"
Community content is available under CC-BY-SA unless otherwise noted.