Andrew Lodge was the killer of his girlfriend, young woman Sharon Decker, in Over the Edge (Case #18 of Supernatural Investigations).

Andrew is the 22-year-old boyfriend of the victim. He has short red hair, green eyes and sports a small gold hoop earring in his left ear. He wears an olive buttoned-up shirt with black buttons as well as yellow suspenders. It is known that Andrew has heartburn, eats chocolates and knows poetry.

Andrew became a suspect after Luke and the player found a photo of him with the victim in the latter's locket. When told about the murder, Andrew identified the victim and revealed that they had been dating for about a year. He lamented the fact that he had lost the love of his life on Valentine's Day and mentioned that Sharon had been at the Valentine's Day shop, prompting Luke and the player to search there.

Andrew was spoken to again about him being at the crime scene. He told the team that Sharon had planned a romantic walk for the two of them. However, Andrew had recommended that they stayed at the roller rink when his heartburn acted up, angering Sharon and causing her to storm out into the forest.

In the end, it was proven that Andrew was Sharon's killer. He admitted that Sharon wanted the two of them to kill themselves in a Valentine's Day suicide pact so they could be together for all eternity. After carving the symbol into her arm, Sharon gave him the knife but he refused to follow her. In the ensuing struggle, Andrew shoved her off the bridge. The team handed him over to the local authorities, speculating a lenient sentence given the circumstances. 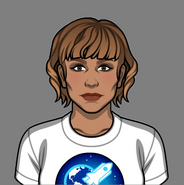 Retrieved from "https://criminalcasegame.fandom.com/wiki/Andrew_Lodge?oldid=522937"
Community content is available under CC-BY-SA unless otherwise noted.